The first issue of Red Agent disappointed me. It's odd calling a futuristic spy story with crazy technology generic, but it was. Red Agent #2 puts that concern to rest. It's more potential than execution, but moving in the right direction. 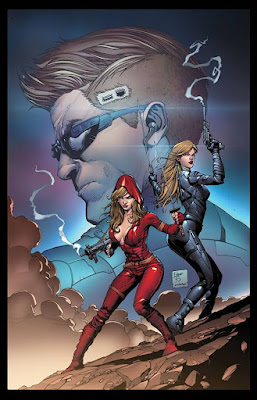 I would have known better if I'd paid attention to the solicits. It's not only from the creators of Zenescope's Grimm series, but part of that world. This issue specifically brings in in another character from that series, and suddenly the story has added magic. I'm a sucker for mixing technology and magic, so this is exactly what I want. Prominent characters who are literally witches, and suddenly I'm far more interested than after the first issue.

A difficult step in bringing technology and magic together is making the world feel consistent. Here, that falls to the art, and it just works, not feeling like two different worlds colliding awkwardly. The problem is that nothing jumps out. It's basic comic book technology drawn with basic comic book magic; they fit, but nothing exceptional.

I enjoyed this issue, but it's because of its potential, since the actual execution is on the thin side. It is a miniseries, so a definite end point should help the next issues come together better. Until then, it's enjoyable but nothing outstanding.

Other notes:
* Is there a point to complaining about cheap cliffhanger endings? It feels like every comic does it, so should I even bother calling it out?
* I see your theme naming, calling two of the characters Avril and Britney. I get it, it made me laugh, I just want to know why.
Posted by Zac at 8:00 PM