This was the episode that everyone was really excited for because it featured Matt Ryan playing Constantine, after his show on NBC was cancelled last season. I found it hard to really get into that, considering that I never watched the show and didn't feel a particular compulsion to watch it. What mattered was how he worked in this episode, which oddly made it a good counterpoint to this week's episode of The Flash. Both of them featured a character with a lot of extra baggage attached (Constantine here, Wells there), but while The Flash used it to kickstart the plotline for the season, here most of it went to this one episode, not having quite as large of hooks for the main storyline. 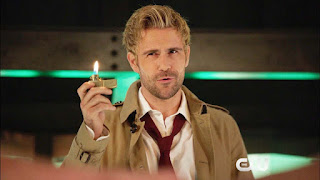 Even though I wasn't attached to him from his show, I found Constantine to be a lot of fun in this episode. In a way, his appearance here reminds of Barry, Cisco, and Caitlin showing up in Season 2, where they felt like very well-developed characters for such a small part. In those situations, it was because they were intended for a spin-off, while here he had already had 13 episodes to really get a feel for the character. Often, characters that are only in the story for a single episode or small arc aren't very memorable, but this works as a great way to get those characters to feel a lot more fleshed out and interesting. 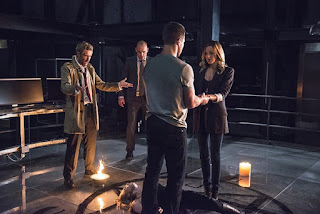 There's also the fact that this show has gone completely off the rails they seem to have set up early, and that is a good thing. Constantine feels like he was supposed to be on the Supernatural set and accidentally walked onto Arrow instead, and the moment that made it all crystallize into that thought was seeing Sara lying on the floor, all the symbols drawn around her, while Constantine was casting the spell. This show has long since left its more grounded self behind, which I see as a good development. I like that they were willing to change when they felt like they wanted to go in another direction, and in keeping things somewhat consistent - while Arrow is getting lighter, it is nowhere near the tone of The Flash - they have kept it from feeling like the show just changed overnight, but was rather part of a more gradual shift. It also has the side effect of moving away from how the show felt too grounded at the very beginning, and anything to help me forget the very beginning is a good thing. 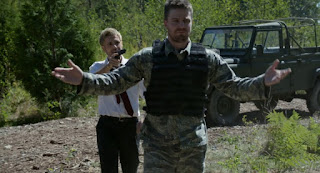 In parts of this episode, I could tell the writers twisting the story into a pretzel to work Constantine in, which ended up working as a great thing. Specifically, they had to make it believable that Oliver would know him, so they put him in the flashbacks on the island. This has the possibly unintended side effect of connecting the flashbacks to the present day for the first time this season, a problem they've had so far this season, as well as the last. I'm kind of missing the Season 2 flashbacks, where they had so much story there that some episodes felt like they spent longer on the island than in the present day, but we've at least seen some connections now, meaning that twisting themselves into a pretzel improved the weakest part of the show this week. 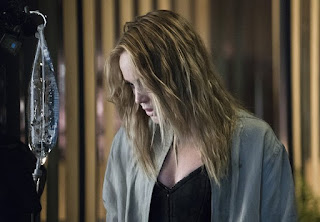 Constantine wasn't the only place that the show has been twisting itself around. Both Arrow and The Flash have been criticized this season for spending too much time trying to set up for Legends of Tomorrow. That's not entirely undeserved, since Arrow doubles up on that here, twisting themselves in knots to bring in Constantine because they need to bring Sara back so she can be on Legends. I don't actually have a problem with this, since Sara is my favorite character in the little Flash/Arrow universe. It's simply an observation of the way that they've set up the season, especially since the B plot in this episode leads directly back to Ray and the fact that he survived the explosion at the end of the last season. 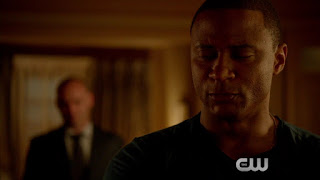 We also have an answer now to why Andy Diggle was killed, but this is by far the strangest part of the episode, even with all the out and out magic. The story we have is that he got involved in drug and arms dealing in Afghanistan, H.I.V.E. didn't want the competition, so they killed him. It makes sense on all story counts, but it feels like this was far too easy. Lance seems to have gotten the information just by asking, and he could have just told Darhk that he knew Andy's brother, but that would seem to lead to Darhk questioning too many things. It would be a bad decision for Lance to make to do that, or he could have lied about things, also a bad decision. I'm just not sure what they're doing by seeming to close off this storyline so suddenly, which many people have interpreted as Andy is still alive and working for the Ghosts, which feels like the wrong way to take that story. I have faith in the writers, I just have no idea what they might be doing with the story or why they would make those choices.

Knowing where everything came from with Constantine and where it's going with Legends of Tomorrow, this episode is really strange. It worked a lot better as a mostly contained story than I expected, and despite being this big event with Constantine coming in, fits well as part of the season so far. At times, this might be glorified setup for Legends, but it's a fun version of that, so I'm happy with how it turned out.
Posted by Zac at 12:00 PM