I love the Buffyverse, but I've had a rather complicated relationship with the comics recently. There has been a lot of good recently, but I've also been mentioning in my last few reviews that it feels like they might be losing their way. After this issue of Angel and Faith, which has led me in both directions, I've given up on trying to project or predict where it's going. All I can do is look at the issue in front of me and evaluate it, and there's a lot of good there right now. 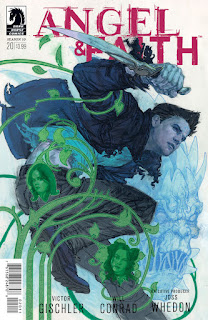 First is the bad, which will gnaw at me if I don't get it out of the way first. It seems that the Archeus story is never going to end. From the first time it popped up, it seemed like a lot to add so late in the story, and it has just kept going for so long at this point that I don't know what to make of it. It's especially frustrating because he's a bit of a black hole for plot and characterization, taking up so much of the story when he's there that there isn't much room for anything else around him.

This issue, however, he's not nearly as bad in that department. The characters are given a bit of a chance to breathe in this issue. I'm especially glad to see good interactions between Angel and Drusilla. From when she showed up, I was complaining that she felt like a generic vampire mastermind, but her interactions with Angel are spot on, finally justifying having her in the story now. 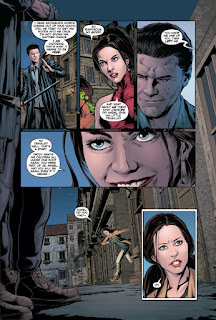 The other character I'm glad to see back in full form is Nadira. She was created in this series last season, and immediately felt like a part of the story in a way that most characters invented for the comics did not. As a Slayer in Season Nine, she was always a highly proactive character with some serious anger issues, but she was turned into the mysterious oracle this season without real development in that direction. Here, she's showing that those characteristics are still there, which makes the frustration I had with her before a little more bearable.

Unfortunately, this arc suffers from the same problem as the last, not ending so much as just stopping. This has been a frequent problem, which does a good job of teasing for where things are going next, but not giving a satisfying ending to this piece of the story. They even bring back the statue that was shown at the end of the last arc, which I still don't know what it is, and they are in no hurry to tell us, which again teases but just leads to frustration.

There's no way I'm stopping this series any time soon, but I'm not going to project or predict what's coming in the future anymore. The plot in this issue feels stretched out, like it has many times, but it has some strong character moments. I would love to have both, but if I have to choose, I'll choose the character over the plot, so this issue ends up doing a pretty good job of things.
Posted by Zac at 12:00 PM