The only thing I am more excited for than Wayward is the return of Saga, but that is another story for literally another day. I've been drawn to this from the beginning, loving the way that it legitimately does both manga and western comics without feeling pandering, and I missed it a lot over its hiatus. I can give it no higher compliment than this: I love it, even though it is full of spiders. 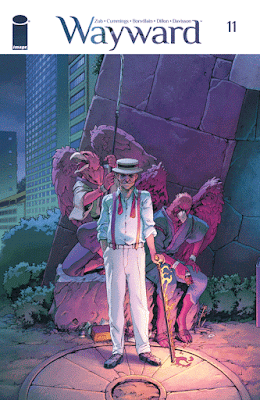 I was a little underwhelmed by the end of the last arc, which is pretty much exactly where this issue picks up. There's some flashing back and forth in time at the beginning, which was a little confusing, but didn't matter as much as you would expect. While this picks up from that point, it also is obviously building back up from being on hiatus, and doesn't quite have the momentum that I'm used to the story having. While I really enjoyed the issue, most of it is just checking back in with the characters and slightly starting to move things forward.

We have slight movement on most of the plotlines, but nothing I can really sink my teeth into. Emi tries going home for a little while, but what happens there is kind of unclear, either in the events or what they're going to mean. We met a new character, who isn't named yet, who has some sort of electrical abilities, but we don't know who he is or what impact he'll have on the story yet. There's even a bit of movement with the old man in the nice hat, who we now know is called Nurarihyon, but it's lacking in the specifics there. What this issue does very right is reignite my excitement for the series. It's not just bringing back the characters, but setting some things up for the future. The biggest problem I had with issues in the last arc was the lack of Rori. After being the lead for the first arc, she took more of a supporting role, and I think the story works best when she's in the lead. She spent most of this issue unconscious, but the ending very strongly suggests that she will be central to at least one storyline going forward, so color me very excited.

None of this means that I don't like this issue, it's just hard to find something in particular to grab on to and approach critically. For now, if you haven't read this series before, go back to the first issue and start reading from there. It's not a huge investment, and it's one of my favorite comics out right now, so it's definitely worth your time and effort.
Posted by Zac at 7:00 PM