Limbo is yet another in a larger than expected number of comics about Private Investigators that I've stumbled into recently. No, I don't mean that in the "Really, another one of these?" sense, as Limbo is a very different entry into that genre. It's the kind of thing that shows why this kind of story seems to last forever, since there is always something new that they can do with it. 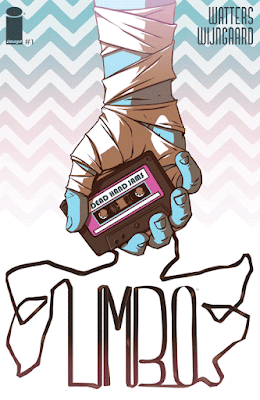 This is set apart from other PI stories because of the world that it inhabits. It's a world with magic, but specifically a world that treats magic as almost something mundane. It's not a big deal that someone is involved with it, since it's just something that has been around and is part of people's lives. Even when there's something seemingly out there, like a recreation of Dia de los Muertos that doesn't appear to be just people in costumes, it's just something that everyone knows about and deals with, not a really big deal.


The magic really comes across in the way that it looks. The creators said that they were going for a 1980s VHS aesthetic, and even though it doesn't look like any VHS tapes I ever watched, it feels like it fits in there. Something about it strikes me as similar to Phonogram, in the strange music/magic feeling that is throughout that comic. This has similar ideas, with a long sequence equating the magic with dancing to music, another with strange things happening while watching TV. These are a mix of things, mostly mundane and occasionally out there, but always very striking.

The story here is fairly standard for a PI/noir story for the most part. Clay is even the amnesiac detective who starts the story hiding in a seedy bar, hoping that no one finds him. He eventually gets a client, a woman who's a singer in one of those bars afraid for her life because she saw something that she wasn't supposed to. If it wasn't for the magic element, most of this story would feel very standard, a not so interesting version of something I know I've seen before. 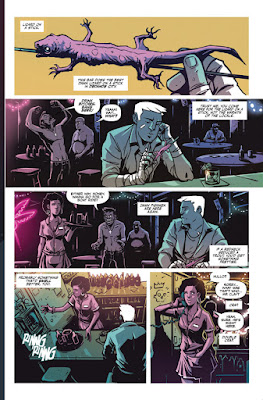 Where it gets different than I expected is the ending. I often complain about the last page cliffhanger, when the story is stretched out to make sure the turning point happens on the last page, and that is very far from what happens here. I like the ending, but I have trouble telling why, since it feels like it should not work at all. It's building up tension, consistently going up and up, and doesn't release any of it, instead continuing to build it up to the end. It almost falls into being something I don't like, stopping the story more than ending, but there's deliberate build up to that moment. This ending is less a cliffhanger and more a mission statement, setting a tone for the rest of the series, so though it's not a contained end to the story, it still feels like an actual ending.

I didn't know what Limbo was going into it, but it turned out that I liked it quite a bit. From the ending, I have a vague idea of where it might go next, but I don't really know. What I do know is that this issue did its job, making me want to pick up the next issue when it comes out.
Posted by Zac at 12:00 PM