This was originally posted as a review for Word of the Nerd. Reposted here with slight modifications.
When I previewed upcoming comics, all I needed to be sold on Dead Vengeance was the tagline: Dead Private Investigator Tries to Solve His Own Murder. It's a great start for a high concept story idea, and the opening scenes match that good start. We have John Dover, former radio personality, waking up after he's been dead for 10 years, trying to figure out what happened to him. It's set in 1940 and is really going for a noir tone, so you can probably guess what the story is setting you up for.

So far in this issue, the story has been about as straightforward as it could be, given the premise. After waking up from the dead, John has been trying to figure out what's happened, why he died, and everything he can related to that. There is a bit of a moment that suggests the story might not be as straightforward, when John wonders how he discovered exactly what he needs at just the right moment, but it's unclear how the book meant it. It's either a moment of tongue-in-cheek poking fun at the genre, or playing it a bit too straight and playing up the joke of the moment. That moment might mean more in the future about not taking the genre so seriously, or it could just be nothing that I got caught up on. 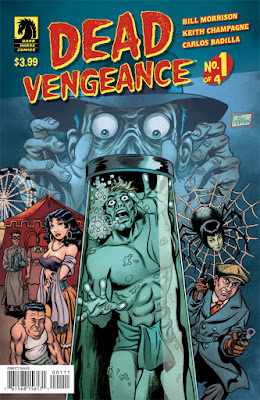 The other part that I got really caught on was the setting. I would expect most noir in this time period to be set in Los Angeles, or maybe Chicago, but this is set in Detroit. Though I've moved, I lived most of my life in that area, which made things feel just a little bit more real, even though the book has basically nothing to do with real. The locations were familiar to me, as well as the history involving The Purple Gang, and though there wasn't too much detail, just going with these familiar names and places helped me to place it in the world. It's where I'm most subjective, but it really helped the book stick out to me.

This is also a bit of an outlier with how noir stories normally look. I expect noir to be grimy, run down, black and white worlds, and that's not what this was. The world they were in was run down, which only makes sense with it being 1930s/40s Detroit in the middle of prohibition and political corruption. It's much more colorful than that world would suggest, lacking the muted or washed out look I was expecting.

For all these things, which are good but not great, the book really runs off of John Dover and his friend, Joe Preston. The story we're told in this is mostly standard, as a murder mystery would go. We spend most of the time with Joe explaining what happened, not just since John died, but before, so he can help get his memory back, making this almost entirely flashbacks to explain the backstory. There's so much backstory there that we're not finished with it at the end of the issue, but it flies by because those two characters have so much charisma and character that it all just flies by. It helps that John was an old radio personality, perhaps a bit on the cheesy side, but with so much charisma that he comes across as truly genuine in all those moments.

No, the story in this issue hasn't been the most original, but it's still off to a good start. It has some characters that I really want to see more of, and some other elements that really appeal to me, so I know I'll be back to read the next issue.