This was originally posted as a review for Word of the Nerd. Reposted here with slight modifications.
I am a sucker for ridiculous concepts for a story. Make it as stupidly over the top as possible, with ideas that seem to have nothing to do with each other and could never work together, and I'm going to be predisposed to wanting to read it. Power Cubed falls right into that category, having a mix of all sorts of elements that don't seem to fit together. If done wrong, however, that makes these comics doubly disappointing - not only bad, but a bad example of something I love. Fortunately for it, Power Cubed is so far a good, if not great example of that kind of insanity, teetering right on the edge of great and disaster, and tipping over towards great.

A great sign in this kind of story is that it feels like everyone is having fun. This comic feels like a team of people having fun with coming up with insane ideas, fitting them together, then drawing it and letting it go wild. For one, the cube with reality-changing powers is given to Kenny, a very creative type and also our main character. He uses it to, for example, turn a staircase into a T. Rex, which still maintains some of its staircase look after it has become a T. Rex. Constantly turning one thing into another was taken as opportunity for the art to just go crazy, making everything look like the new thing (car, T. Rex) while still having some of the texture of the old thing (toaster, staircase), and it's not just wondering what new thing will be conjured up and how is it drawn, but reinforces that absolutely anything goes in this world. 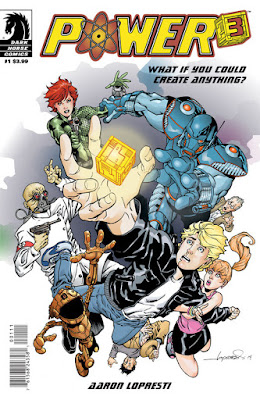 If there's a weakness, it's that some parts of the book are trying too hard to be funny or irreverent or whatever tone they want to hit. The biggest example is the henchmen of Doctor Cruel, the Nazi scientist looking for the cube. These henchmen seem to be set up as the standard straight man and foil, but they seem to take to those roles too eagerly. The straight man is supposed to be the normal person giving a more real or grounded perspective to what the foil does, but here he feels more outright cruel or antagonistic than exasperated. The foil also thinks he's supposed to be playing the fool, and goes so far over the top that he feels like he's intentionally being stupid for its own sake, but without any self-awareness to it, or anything else to redeem his stupidity.

Luckily, the other characters work better than those jokers. Doctor Cruel is bumbling, but his henchmen are so incompetent that even he gets frustrated by everything that they do. The surprise stand out character is Kenny's father, who seems to be the only character not even tangentially aware of what kind of strange world they live in. Sometime before the story starts, he lost his wife and is unable to communicate well with Kenny, leading to some scenes of bad communication so accurately done that it hurts to read. He plays his grief and trying to make it up to Kenny so honestly that it gives the book a real center, in contrast to the farce of the rest of the book. For all its insanity and irreverence, the book has a real emotional center that I was not expecting to find.

It has its problems, but so far there's more good than bad. A few characters are on the bubble of being good or bad, but so far it's pulling off a tough balancing act. If it can keep it up, it'll be exactly the kind of weird, fun thing I like that only comics really seem to do well.