The only thing it took to get me to read Paper Girls was the first credit: Brian K. Vaughan. Saga is my favorite currently running comic, and for that alone I will give everything he writes a shot, even here when I'm a bit shakier on the premise of the book.


Essentially, Paper Girls is Stand by Me and E. T. mixed, with a cast of young girls. I'm not generally a fan of 1980s coming of age movies, but I will give anything a chance. The problem is, it never rises much above what feels like a standard story in the genre. If it would do something unique, or feel like a great version of that type of story, I would have no problem really getting behind it, but I don't find that here. 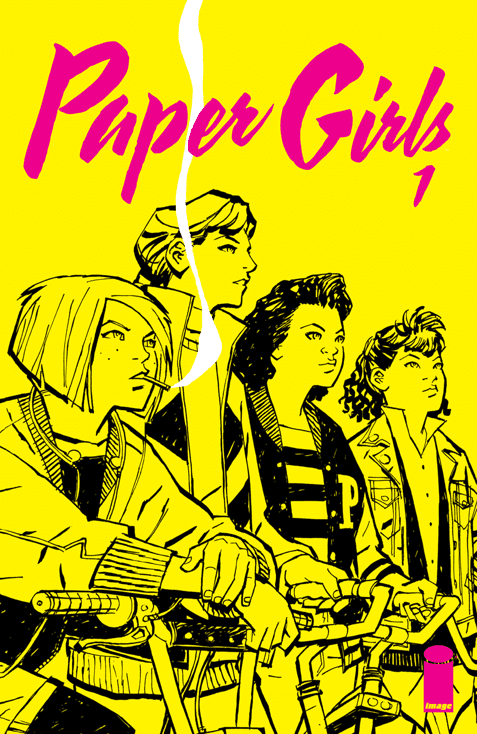 I don't want to say that it's a bad mix of artist and material, but it's so different from the things that I know Brian K. Vaughan for, and it's missing something that all of them have: huge ambition. It's strange to call "young kids discover alien life" unambitious, but it's practically its own genre. In other stories, Vaughan has gone really far and had a big concept to carry the story, such as a superhero stopping the second plane on 9/11 or every man on Earth but one disappearing or however you would describe Saga, and without that kind of big idea to drive the story, it seems to really lack a direction right off the bat.

The art even suffers from the same issue. There's nothing really wrong about it, except that very little about it is memorable. Even at the end, where the great, memorable setpiece should be, it looks uninspired rather than memorable, which feels like the rest of the story was.

Part of the problem is that I don't like this genre. If you like 80s coming of age stories, you might just like this. It doesn't really do anything more than being a decent example of that kind of story, which leaves me feeling quite disappointed at it.
Posted by Zac at 12:00 PM