This was originally posted as a review for Word of the Nerd. Reposted here with slight modifications.
Pixu: The Mark of Evil is not at all a comic made for me. I am usually not a horror fan, and my favorite part of anything usually is the story. Despite that, Pixu does what it does so well that I couldn't help be drawn in, and I ended up liking the book much more than I expected.

For as much as I love focusing on story, that's not what horror stories are really about. While a great story can only make it better, it fails completely if it doesn't scare you or make you feel tense. While I am a relative novice to horror, this book legitimately caused me to feel tense and uneasy for all the right reasons. It worked even though I was in the absolutely wrong place to feel tense or uneasy with it, sitting in a coffee shop in the middle of the afternoon, which is making me afraid to try and read it in a situation where I'd really be prone to being scared. 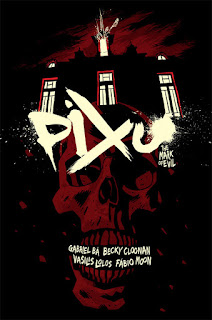 A lot of its tension comes from something I would normally criticize heavily, specifically the lack of clarity to a lot of the story and plot points. They raise the tension significantly, often not knowing what is happening until after it's happened. I normally don't like that type of storytelling, but it's just done so well here that I can't hold anything against it.

I also found the art incredible in its simplicity. It's entirely in black and white, not just meaning that there are no colors but that there are barely any shades of gray anywhere. Despite that, there's a huge emphasis put on detail and shadow, causing the art to be far from boring despite being so simple.

The emphasis on atmosphere means that there is barely any dialogue, causing this book to be either a very fast read, or incredibly slow while you soak in every detail. I tend to focus more on the words and take in the art as it goes, which causes this book to fly by very quickly, despite its length. Going back and looking at it again later, however, it lasted much longer when taking the time to really appreciate all of the detail and feel how it silently builds up so much.

I'm glad Dark Horse is republishing this book. It was originally independently published in 2009, but now it has the possibility to reach a much larger audience. I likely would never had read this if they didn't, but now it's out there for many more people to read, and I think it's definitely worth checking out.