In its first issue, Dead Vengeance was this fun thing that I kind of liked reading. It was a fun read, but not something that I was going to go out of my way to try and sell people on or sing its praises. At risk of spoiling my opinion, this issue takes it from there to must-read in the span of a single issue. This started with a body in a circus exhibit coming to life, and with this issue, it throws out an idea that feels so completely out there that I cannot help but love this book now. I won't spoil what it is, but I will do my best to get across why I love this. 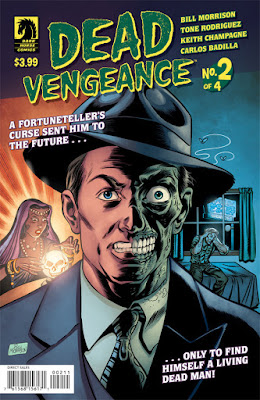 Just like last time, there is a lot of flashback and explanation. Johnny and Joe continue to have enough charisma to carry through it, but thankfully we finish with that and have caught up to the modern day. There are a couple places where the back and forth between past and present is confusing, thanks to the visual distinction between past and present Johnny not always being as strong as it could be. He looks like a zombie, but it's not so distinct to always make it 100% obvious when the storytelling is taking place.

In the personal appeal department, the setting is still very Detroit. It isn't quite as over the top as the last issue, dropping a city, street, or neighborhood name every page, but it's still there. In particular, there is one scene where Joe uses the proper word, "pop", and offers Johnny a Vernors. It could only have been more local if he was offering a Faygo, and by now I've lost everyone who never lived in the Midwest, so I should move on now. 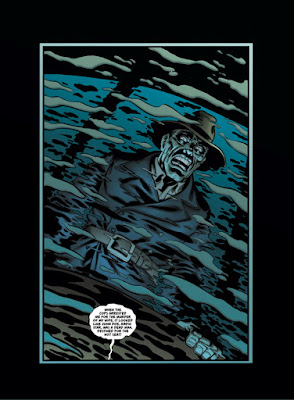 This issue continues to work tonally, mostly by not being serious about what it's doing. It fits perfectly with the story, even if noir is usually serious. The first two thirds of this issue is still following pretty closely the beats of a noir story, then we get to why Johnny came back to life ten years after anything he could remember. When it's revealed why he's here, it suddenly makes sense why this tone was there from the beginning. A serious tone would never work with where this plot goes, so it needs to be lighter, more irreverent. It tones down some of the more over the top elements from the first issue, but where it is now feels perfect for where this story goes.

In a single issue, Dead Vengeance went from "fun little thing I kind of like" to "you must read this now". If you haven't, go back and get the first issue if anything here sounds interesting to you.
Posted by Zac at 12:00 PM