This was originally posted as a review for Word of the Nerd. Reposted here with slight modifications.
The more time I spend with All-Ages comics, the more I think that I'm secretly 5 years old and just good at hiding it. Plants vs. Zombies: Garden Warfare is not only aimed straight at a young demographic, like other Plants vs Zombies comics, it fits a lot of the things that people don't really like about comics aimed at kids. Instead of hating it, though, I find a lot of joy in reading it. 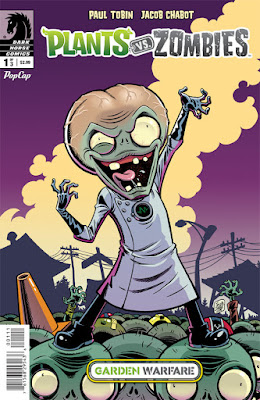 I did pick this up because I'm a big fan of the games. They'd be great games even without the characters and logic, but that added a fun element that kept bringing me back. It operates on one of my favorite questions, "why not?", whenever an idea is thrown out there, and the comic picks that right up.

From just looking at the art, this feels like the game. Everything looks exactly like it did in the games or in a style that would fit right in there. It helps that they have the simple, iconic designs of the plants and zombies from the game, but even the new additions feel like they've already been there, from new varieties of zombies to the mechanical butts. The plants are barely in the story, probably due to behind difficult to characterize, and while they do feel like they could be cut without really missing anything, I like having their little cameos throughout the book.

What's new here are characters, and the mechanical butts, but it's more interesting to focus on the characters. They all seem to fit in with the weird logic of the world, including zombies being something that everyone just accepts as existing, down to recognizing what they are right away. There is a bit of a "kids are smart, adults are stupid" idea running through it, but they take it so far that it starts to work, including when everyone goes off to a free ice cream cruise, showing everyone has the mental capacity of Crazy Dave, who we'll come back to later. 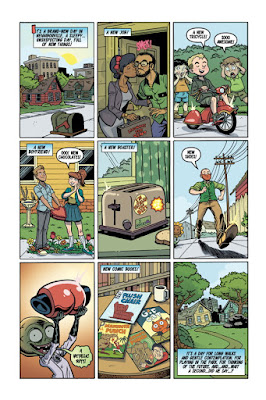 The stupidity of the adults is a bit of a cliche, but this issue is pretty much a mile long string of cliches. It works because it goes straight for Refuge in Audacity territory. It's not just making the adults into idiots, it's making the adults into people who could barely function in society. There's not just a zombie taking over the world, there's a zombie trying to take over the world by manufacturing mechanical butts that come from the future. The characters are very black or white, good or evil, and it runs into the cliches so hard that they just become part of how this world operates, which is on essentially pure joy.

Perhaps the best example of how far they go in the cliches is Crazy Dave. In the games, his characterization pretty much ended at "crazy" and "stupid", but in here, he's almost a voice of reason. He's not overly smart, but he's suddenly become an authority figure that the kids are looking up to in order to help fight Zomboss. It's the most bizarre way to use this character, but that's exactly the way that they should use him, in a story so dedicated to going completely crazy.

I loved this comic. It's not concerned with being good, but making the most ridiculous and over the top thing they can think of. It does exactly what it set out to do really well, and that's always commendable. It also is a limited series, so they only have a limited time they need to keep up this energy for, which I'm really looking forward to now.