This isn't review of anything, or a particularly deep moment of thought and retrospection on Jessica Jones , since I'm six episodes in at this point and haven't had the time to really digest it. Instead, this is about the general feeling I've been getting from this show, and that I got from Daredevil before it:

These shows should not exist.
I mean that as no value judgement, but more of the fact that, looking at what they are and everything around them, it's hard to believe that they are being made. These shows are set in the Marvel Cinematic Universe, as their frequent but not overwhelming references to The Avengers will remind us often. Not only is the style different from the others, but it's so far removed from the rest that it's not entirely clear where it came from. 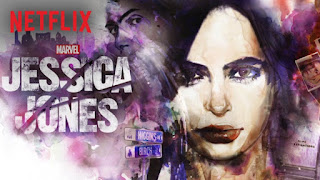 The way I see it, there are three pillars to the MCU right now: the movies, Agents of S.H.I.E.L.D., and the Netflix series*. Each one has its own tone and style, as well as being self-contained enough that they could almost each be their own little universe. What's different is that Agents of S.H.I.E.L.D. feels like it evolved out of the movies, taking a supporting character to the side as the lead and starting with that kind of tone and slowly evolving into its own thing as it went.

The Netflix series, on the other hand, don't have any kind of lineage like that. It's not just that they didn't have anyone from the movies get them started, though it might be a contributing factor, but that it feels like they were a completely different project eventually folded into Marvel and given a rewrite to fit things. That's almost the origin of Jessica Jones, which had been in development for 5 years and was completely rewritten when it was picked up by Netflix, but wasn't for Daredevil, yet feels very true of both.

Then there's the way that these are released. I don't particularly like Netflix's release strategy (more on that another time), and the fact that they tend to exist on different time scales for different people makes it a stranger thing than the other "pillars" of the MCU. The movies come out and usually everyone sees them in the first week or two, and Agents of S.H.I.E.L.D. comes out weekly, so they have an obvious place and way of interacting with them. I flew through Daredevil in two days, and Jessica Jones will take me longer, but also will not last very long compared to what it could be. They happen and are over, and there's no real way to have a conversation about them, so in addition to feeling out of place in the universe, they don't have the same collective sticking power that the rest of the universe does.

None of this is a slight against these series, just an observation. These feel like they shouldn't exist, and it's hard to believe that it's real, but I'll keep coming back for more whenever they make it. They're just in a very strange place, and I found it particularly interesting why it felt this way.

*For those wondering, I'd tend to put Agent Carter with with the movies, since it feels more like those than it does Agents of S.H.I.E.L.D., but that sounds like a different discussion for another time.
Posted by Zac at 9:10 AM