Last Sons of America is a really strange comic. It feels a lot like BOOM! is trying to make an Image Comic, with a very different style than I expect from them. It's going after big ideas in a very grimy and bleak world, and I found myself fascinated and intrigued, even though I'm not entirely sure why I like it. 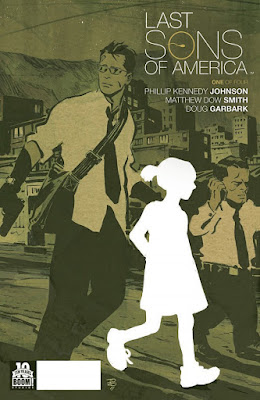 Here is the basic premise: an infertility plague has hit the US, and just about everyone there is now unable to have children. That leads to a black market for children from other countries, and we follow Jack and Julian, brothers who are in the business. They go to families in Mexico and offer to buy them out of poverty if they will give up their youngest child to later be sold to a rich American family. They are the good guys, not abducting kids off the street, but making deals to pay the family and losing business for it.

This is such a messed up and twisted premise that I can't help but love it. The tiniest amount of thought will lead to a number of disturbing parallels to things going on in the world right now, and it's obvious that they're going after that idea on purpose. It's especially uncomfortable because our protagonists are part of essentially human trafficking, but they are trying to be more legitimate about it, fighting the understandable urge to abandon all principles to keep the business afloat. 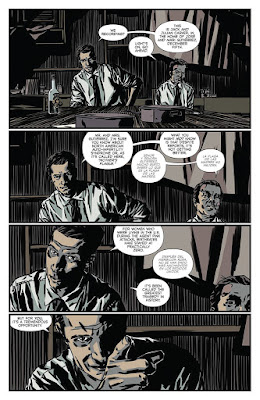 The world doesn't just feel dirty because of what's happening, but because of how it looks. This is set in the poor areas of Mexico City, which already tends to look very bad, so that's taken as the baseline here, then with an additional layer of hopelessness drawn on top of it. This is obviously a place that was already bad, then they made it worse to match the state that the world is in during this story. Then there's the added authenticity of half the dialogue being in Spanish, which later becomes a plot point that Jack can't speak it but Julian can. It's not required to be able to read it to get the story, and it adds a lot to the atmosphere and the feeling of it being real, despite not being our reality.

I go through all of this without mentioning the story, but that's because so much of this issue was setting things up for the story. It doesn't really start moving forward until the end, but the atmosphere and exploring the premise is enough to keep me moving forward, not being bothered by the existence of a last page cliffhanger that would normally have me ranting for at least a paragraph.

I found Last Sons of America intriguing, even though it's lacking in a number of places that should be a problem for me. There's probably a better version of this story out there, but this one is really intriguing. It's a first issue that makes me want to read the next, so it did its job well.
Posted by Zac at 12:00 PM