I was not planning on reviewing two episodes of The Flash in a row, but that was before I watched this episode and started thinking about it. It just sticks out from everything else the rest of the season, and everything else that was on this week that I might have wanted to talk about, to the point that I have to review it. In this episode we meet Zoom, who manages to meet if not exceed all expectations, and the real question to ask is how the show managed to pull that off.

After this episode, all the reviews and podcasts are talking about Zoom, even though he was really only in the last third of the episode. It makes sense, as he is being set up as the Big Bad of the season, and that will get you a lot of attention. He is also the best part of this episode, coming out of nowhere to hit that point. 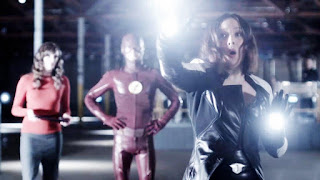 What strikes me is just how well constructed this episode is across the board. When it starts out, and for most of its run time, it is a lackluster episode of The Flash. There's not really been outright bad episodes, just ones that are lacking somewhere, and this seemed like one for the first two-thirds. We started on the overly cartoonish fight between Dr. Light and Barry, then go with the slightly cheap flashback to 72 hours earlier. Most of where it follows from there is basically what we expected to see, with Linda acting as bait for Zoom. Somehow, even though that is a really strong idea, and Barry revealing his identity is a major thing to play out, it doesn't feel like it has the importance that it really could. There were elements that I liked, such as Linda testing out the gloves while they kept malfunctioning, or Iris inverting her Season 1 place by actively pushing the plot forward, and not much I actively disliked, such as Cisco constantly pushing Wells to touch him and get some of his visions, but the majority of it just played out like a mediocre Season 1 episode. 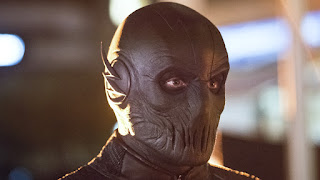 Then it turns out that all of this was deliberate. They get back to the point where they started, and Zoom never shows up for them to try and take him down. The biggest element of genius here is that I can't see another way for this to play out in a satisfying way, but I never quite predicted that they were going to go in the direction that they did. If Zoom never showed up, it would make sense from a story logic sense, but that wouldn't be satisfying drama. Instead, he shows up in a different place, a different context, and sets the end of the episode into motion in such a harsh way that it feels whiplash inducing. In last week's Arrow review, I mentioned that it is getting lighter but hasn't reached up to where The Flash is in tone, and here it makes it feel like The Flash wants to reach down to that level itself, with the end playing out as basically the worst possible sequence of events. 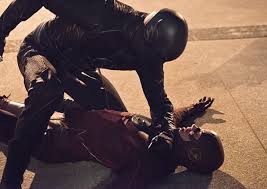 It's obvious that Zoom was not going to kill Barry. He could have killed Linda or another supporting character, but killing someone would be taking the easy way out. Zoom is established, everyone hates him and has something simple to react to, but it doesn't really make him stand out as the villain. The good comparison to make is to the Reverse Flash, since he was the Big Bad of last season. He was faster than Barry and never really lost to him, only losing when Eddie kills himself to change the timeline. Zoom not only is able to not lose to Barry, but essentially goes the direction of Bane, literally breaking Barry and dragging him around the city, showing him to everyone who knows him and the people who see him as a hero, showing them how defeated he really is. He knows the city, he seems to know that Barry is The Flash, and he's so fast he can catch a lightning bolt, setting up that there is no hope. 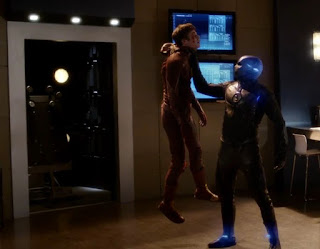 There's also no out for the team. They try three times to hit Zoom with the dart to suppress his speed, and even when they do hit him, it's only enough to slow him down a bit, not take the speed away completely. It's the only reason that Zoom doesn't finish killing Barry, but by that time the damage is truly done. Even though Barry is likely to recover from his paralysis soon, the psychological effects of losing like that are going to hang over them for a long time, and that is going to be the more important effect on them, since Zoom got away and everything they did was for nothing.

This episode feels like it should be the midseason finale, but that's episode 9, not 6. We still have a Grodd episode and the Arrow/Flash/Legends of Tomorrow crossover between now and then, even though this feels the most like "The Man in the Yellow Suit", last season's midseason finale. That makes me wonder what exactly they're going to be doing there, if they've already used the big blowout for this episode.

At the top, I asked why this episode was so good. The real answer is that this is just a very well constructed episode when looked at as a whole. They set low expectations then absolutely plowed through them, set up a situation where there was no escape and no easy outs, and by the time it was over, what little victory they could have was just that no one was killed. The biggest thing is that all of this fits together so perfectly that I can't see it having played out differently and still make sense. It's not a complicated answer: this is a great show firing on all cylinders, so that even when something they were doing was not good, they were doing it deliberately. They took an impossible task and perfectly built a story around all of it; a simple answer, but nearly impossible to do, and they deserve all the credit we can give them for it.
Posted by Zac at 12:00 PM