It is pretty obvious from reading this that Zodiac Starforce is a 4 issue series. We're on issue #3, and it has the very specific feeling of a story trying to stop itself short before it reaches the real climax, putting this in an awkward place. It has to put everything at the lowest point, but is not really allowed to do anything with that yet. It's kind of an awkward issue for that reason, but a small bump in their execution is not going to stop me this close to the end after liking it so far. 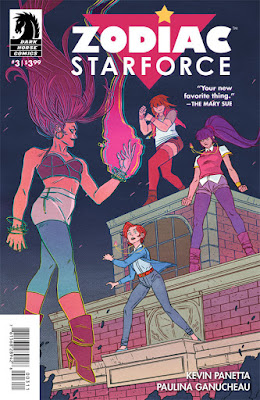 It is living up to the promise of a climax, with everything getting worse all the time. Emma's illness is getting worse and there are even more monsters everywhere. Everything is a struggle for the girls, and they feel hopeless against the villain, but she is unfortunately where the issue starts to lose me.

I like a sympathetic villain, and the idea of a villain who is a reflection of the heroes. Unfortunately, the way that they handle it here does not make that work all that well. It seems like a good setup at first, if a bit on the nose, but as it plays out, it just seems like an uninspired reflection of the heroes. It also doesn't help that we have an irreverent, quippy villain. Every time she says something, it feels like they're trying a little too hard not to be serious, and while I like that kind of humor, there is such a thing as too much. In trying to make her a reflection of the heroes, they almost turn her into a joke instead of a menacing villain. 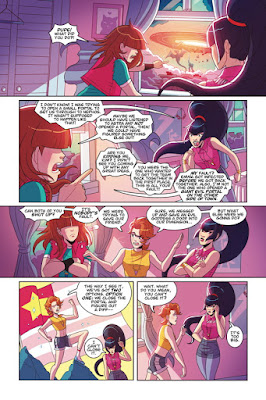 My favorite idea in the series so far comes up in this story: High School Detective Club. These characters we've barely seen in the story have been following all of the weird things in the background of the story, and have put together that something weird is going on. It can feel a bit too much Chloe and the Wall of Weird from Smallville, but that's not a bad thing necessarily. What sticks about this is that none of these characters are our protagonists. In most of these stories, the group than thinks there's something weird up are pretty central to the story, and seeing them here as assistance rather than the main characters is a great little change I like to see.

This issue was a little mixed, but if you're this far in, you're probably just going to read the final issue regardless of this. It seems like it's a bit of build-up for the final issue, where it can really move forward at full speed, and that's when we'll see how good the series really was.
Posted by Zac at 12:00 PM