This issue keeps going back and forth between being something I read before, and something that I forgot happened. It's at a point in the series that it feels like they're waiting for Angel and Faith to wrap up so that this can pick up full force when that ends. Until then, this issue is mostly just here, moving the story only incrementally forward and repeating character beats we've seen before. 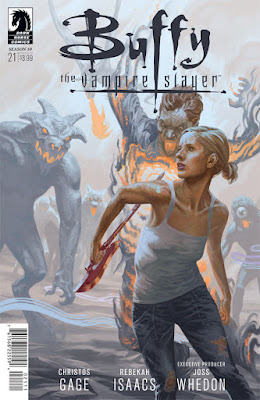 What we're seeing again is people reacting to the Buffy and Spike relationship. When it happened the first time, back in Season 6 of the show, the other characters gave them hell about it all the time. When it happened again earlier this season, that same thing happened again. By this point, there's nothing to add to this, but they keep bringing it back up and going through the beats again, making the normally strong character beats feel like retreads. Even when it's being delivered by Harmony, the unexpected comic relief MVP of the series, it doesn't really connect as anything that we haven't already been over several times before. 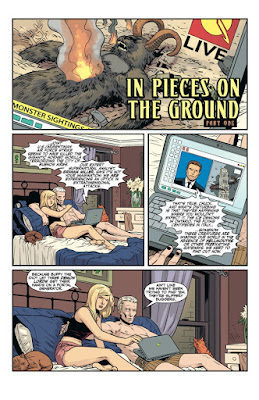 The character beats would need to be strong because there's not exactly a lot of story in this issue. Satsu, who you might remember as the Slayer that Buffy slept with once in Season 8, comes to Buffy, trying to get her to join the Army in dealing with the Archeus threat. This leads to Buffy reminding her (but mostly me) of the fact that the Army killed Slayers in Season 8, something that I had completely forgotten had happened up until this point. Buffy tries to get some vampires to take their side, and something about a fight to the death gets them to bring the vampires on their side, but even what that means is unclear, as things end without a real direction pushing it forward.

The real disappointment is that there really isn't anything interesting in this issue. All of these problems are more annoyances than severe, structural problems that would at least make it interesting to talk about. Instead, it's just a nothing issue in a series that really should be so much more than that.
Posted by Zac at 7:00 PM