This was originally posted as a review for Word of the Nerd. Reposted here with slight modifications.
Trying to review something like this is difficult because I feel so mixed on different aspects of it. There are times that something is "all good" or "all bad", or feels overwhelmingly one way or the other, and that makes giving an opinion of it easier. When there are different parts, all of them working at different levels, it's harder to come to a conclusion. Joe Golem: Occult Detective falls right into this, with different storylines of wildly varying quality, and that makes it quite difficult to really talk about. 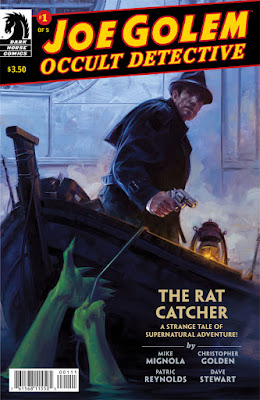 What makes it difficult is the number of differing storylines. There is the "current day" of 1965, where Joe's investigating a kid who went missing from an orphanage, flashbacks of his friend Simon Church trying to become more than human, and flashbacks to a golem centuries ago. These three stories all different levels of focus, with the present day investigation getting the most. It also is the one that has the most going for it, with a clear structure that makes sense in this issue. I can make my guesses for why the other stories are here, but they start and end so quickly and with so little connection to the 1965 story that they barely feel like part of the same book instead of adding up to a coherent overall story.

What I don't have problems with is the art and design. I've not read a lot of Mignola, but he has such a distinct style that it's obvious this is something of his. It's not even just the immediately obvious, like the variant cover that he drew. It's the rest of the book, even though he didn't draw any of it himself, just screams out his style. The monster design reminds me somewhat of Abe Sapien, without looking like a copy or obvious rip-off that would make the resemblance feel cheap. The setting even feels right at home there, being set in 1965 New York decades after a flood put most of the city thirty feet underwater. The setting isn't even an overwhelming part of the story, mostly serving as the backdrop for establishing shots, but that little bit of design goes a long way to adding a unique feeling to the book that's hard to describe. I just know that it makes me think of Mignola, that without being able to put my finger on the specifics, it just feels like his work. 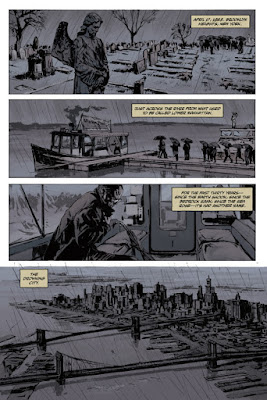 I'm also not complaining about the heavy use of narration, which I know is unusual for me. The comic is going for a specifically noir feeling, and narration is just a staple of noir. It's also not overwhelming, using narration to explain what we're seeing or being used instead of visual storytelling, but more to get in Joe's head. In this case, it strikes me as a perfectly acceptable use of narration.

I'm torn on this issue. I really like Joe's story, but I don't see what the point of the rest really is. If I come back to the next issue, it's because of that, not because of the other stories. Due to having the same inconsistency I found in Johnny Red earlier this week, I'm giving much the same verdict: what's good is really good, but the rest makes it feel muddled overall.