TV Review: The Flash Season 2 Episode 5: The Darkness and the Light

Though they didn't share any explicit connections, this week's episodes of The Flash and Arrow had an interesting structural connection that I don't think was intentional, but found interesting nonetheless. Both brought in a character with a lot of attached baggage (Wells here, Constantine there) and mostly built the episode around them. Over on Arrow, it felt like a diversion from the main plotline of the season, while on The Flash it's being used to kickstart development far more quickly than we expected. 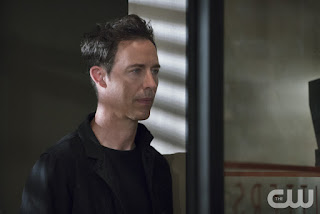 For as much as this episode is about a lot of other things - revealing Cisco's powers to everyone, fighting Dr. Light, advancing the Zoom storyline - it feels like the center is about Earth-2 Harrison Wells. Given how he had been the focus of the stinger at the end of each episode, seeming evil like he had been all of last season, I was afraid that they were going to go down mostly the same path as they had before. Instead, this version of Harrison Wells is very different from the previous one, probably best summarized by Cisco; their Harrison Wells was evil, this one is "just a dick". 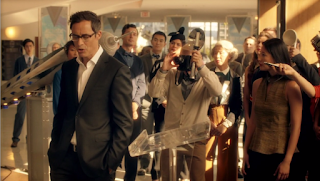 It's not just as simple as that, since with bringing in the multiverse, they can play around with the characters however they like. Over on Earth-2, Wells created Star Labs much earlier, is not taken over by Eobard Thawne, is a tech entrepreneur who acts like Walt Disney (so, like Elon Musk?), and also has a daughter. He's so different there that even being responsible for metahumans on both Earths isn't really something they have in common, since it was Eobard in Wells's body on Earth-1 that created all of the metahumans. They feel believable as the same person, but from completely different circumstances. They take it even further in that direction with his daughter, who we learn has been kidnapped by Zoom, so even the way he acts can be read in many different ways: he could be evil, a pawn of Zoom, or just a desperate father trying to do anything to get his daughter back. He's not just a rehash of the character, but someone very different built from a similar base and played by the same actor. 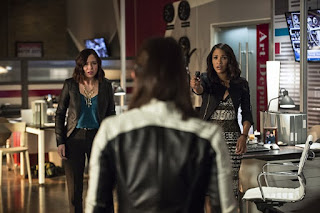 Stepping outside of that story to the villain of the week, we run into the weirdest part of how the episode is put together. It's basically a two-part episode, but that isn't even hinted at until the end, when they start to take Dr. Light's story and stretch it across to the next episode. First, I was amazed that it never got out in advance that Dr. Light was Earth-2 Linda Park, which has to go with King Shark as proof that the producers are getting pretty good at keeping things under wraps this season. There's not too much more to say about this storyline since it mostly just works in service of other things for now: setting up the next episode, where they're trying to use Linda as bait for Zoom, and for pushing Cisco forward with revealing his metahuman abilities. 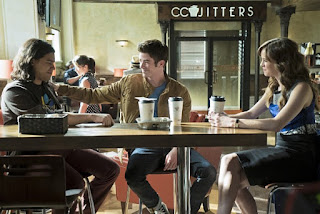 On that note, I am very glad that they've pushed forward with that. I like that Cisco is no longer hiding it, even though he didn't come forward with it and was forced into revealing the truth. It was threatening to be painful keeping the secret, especially when he's not doing a great job at hiding anything about what's going on. It's cut short by Wells realizing that he's a meta and outing him to the team, but everyone understands and it's not made out as a ton of drama. There's also a small nod to Caitlin and her evil alter ego, which is more and more likely to be from Earth-2 and to happen sooner rather than later. With all of these, it's good to see they're not dwelling on this forever, instead developing the stories quickly. 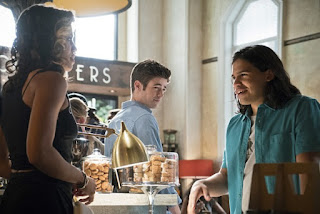 A common and not entirely undeserved criticism of The Flash - and Arrow, in fairness - is that they're spending too much time setting up Legends of Tomorrow, and not dealing with their own storylines. This episode throws all of that out, after the last episode felt like the second backdoor pilot for a Firestorm series. There is some relevance to Legends in that we see Kendra Saunders, who is going to be Hawkgirl, but she is in such a small part of the episode that it fits right in almost perfectly. In the first scene, she directly leads into Barry asking Patty out on a date through Cisco's bumbling flirtations. When they bring her back, it's obvious that she's going to be important moving forward, but it doesn't take so much away that it feels like Team Flash are guest stars in their own show. 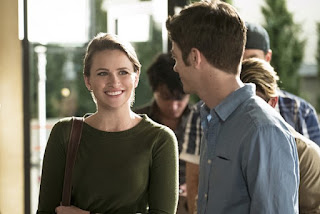 We also have Barry and Patty, who are continuing to develop a relationship. In some ways, it feels like The Flash is making up for not having Felicity by creating their own version and pairing her up with Barry, which is not a bad thing. They have good chemistry together, and even the cringe-worthy moments work well. They take the literal blind date, which makes absolutely no sense when you think about it for any length of time, and make it all work. It went on longer than it should have, but it's perfect for the way these two interact that they have so much awkwardness in their dates. It also makes me want to take Patty, Felicity, Kara from Supergirl, and put them in the same room, then throw in Ray and Curtis from over on Arrow, and see possibly the most awkward group scene these shows have ever had, which is a pretty high bar.

The last few weeks, The Flash has been kind of buried under Arrow and Agents of S.H.I.E.L.D. in my mind, which is unusual. It's not been bad, it's just not quite up to the standard of last season, where it was one of the first shows I watched each week and the one that stuck out most for me. It's climbing back up to that position, and if they're going to follow through on their promises from this episode, they'll be back up there soon.
Posted by Zac at 12:00 PM