All that this book had to do to hook me was call itself "Biblical Noir". One thing that comes with my religious background is that I really like stories that are based Biblical stories or ideas, but not the sanitized versions that pop up a little more often. I wouldn't quite agree that The Goddamned fits as noir, but it is Biblical and different from most that I see, so it has me from the start. 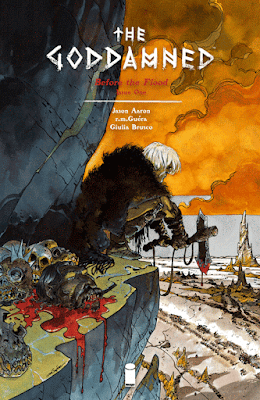 Unfortunately, the story in this issue is not all that great. I love the premise and setup to it, but the actual story that's here in the episode is not all that interesting. We spend a little time with Cain getting into squabbles with people as he is walking the Earth, but nothing really comes of it story wise. It's hard to even describe or criticize the story, since there's little in the issue.

Then there are all the other things in the book. Though a combination of the premise, setting, and design, the book gets me hooked from the beginning. It's the kind of thing that I particularly like, so I'm willing to overlook the story issues because of those things.

First thing is, yes, we are following Cain, 1600 years after the Garden of Eden. After he killed Abel, God made it impossible for him to die so he would have to live with that, making him "The man who invented murder. The man who cannot die.", which is perhaps the most perfect boast you can have for a badass character, which is the only way I can think of to describe the immortal action hero that he is here. 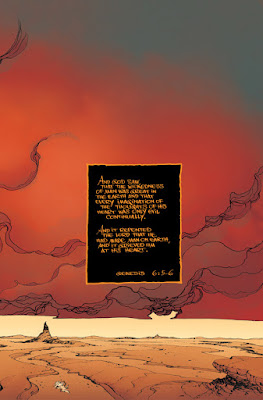 On less radical departures, there are things that people don't normally associate with Biblical stories. This is set just before Noah and the Flood, a time in which the world was terrible and awful, the Flood being an instrument to destroy that. This world fits that completely. It is dirty, it is full of debauchery, and it looks so bad that you would understand destroying it because there is nothing else to do to save it. There are also references to the Nephilim, in this case being the version that are giants, yet another element that I rarely see referenced.

Unlike their description, this book is not noir, since there is no mystery so far to be followed. The story is not too strong, but I love the setting and general feel of it. If I was back in high school, this twisted reinterpretation of the Bible with just enough authenticity would have been my favorite thing in the world. I don't know if I would call it good, but it's so focused on being the kind of thing that I want to see that I can't help but like it so far.
Posted by Zac at 12:00 PM