Agents of S.H.I.E.L.D. can be a weirdly frustrating show at times. When it's good, it's really good, but not for reasons that are all that interesting to talk about. It also has difficulty in trying to balance different storylines, so that when it's really good in one area, it has problems in another that don't kill it, but just drag things down a bit. This episode, "Chaos Theory" is a great example of that, putting a temporary bow on the Lash storyline while kind of fumbling some stories in the background. 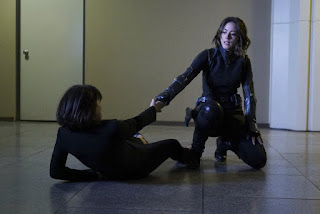 The first side plot that bugs me was continuing to deal with the A.T.C.U. The fact that we're not dealing with an evil version of S.H.I.E.L.D. for the third time is a good thing, but the way they handled the rest of this was a little wonky here. We had a conflict between Rosalind and Daisy, with Rosalind saying that Inhumans needed to controlled and Daisy believing that they can be worked with. By the end of it, Rosalind has seen that Daisy can do good with her powers, and Daisy agrees that they should put Andrew in stasis for the time being. While it's a good outline of the idea, Rosalind hasn't so far been anti-Inhuman like "Real S.H.I.E.L.D." was last season, so her opposition to all Inhumans and seeming surprise at Daisy using her powers for good fell flat for me. There was also the weird moment when they asked Daisy's thoughts about putting Andrew in stasis, which strikes me as strange because why should she be one to make the decision? It seems like a moment only there to bring her closer to Rosalind in the middle, making the whole thing feel a little too neat. 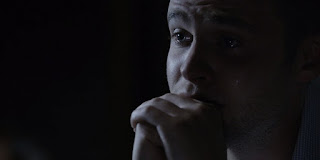 Then there's Fitz and Simmons, trying to work on both their relationship and getting back to the planet Simmons was stranded on. They have good character moments, but there's just so little of them in this episode that it seems unnecessary. The plotline pushes their search for a way back forward just a tiny amount, and while they're also trying to deal with their own relationship in good moments, it just felt like they were in there just because they had to be, not because there was a good reason. 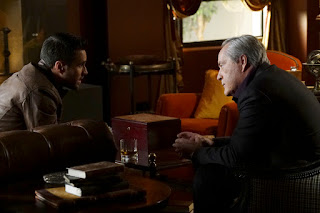 There's also the barely existent Ward/Hydra storyline. Ward doesn't work well as a villain when he's alone, so having this seeming higher-up in traditional Hydra is a good thing. The end with Rosalind calling in was a good way to tie things together, but I find people's interpretation/suggestion that she knows about this and is evil to be a little short-sighted. This would just make the conflict into S.H.I.E.L.D. vs Evil Government again, which we've been over a few times. Instead, Rosalind genuinely trying to do good but just being misinformed is a much better way to go about it. 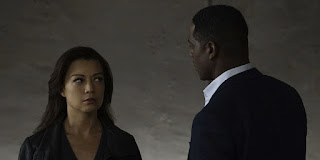 All of that was relatively easy to talk about, though I've had trouble talking about this show's subplots before. Those were the weaker parts of the episode, but when the show is working, it's usually all for the same reason. The majority of this episode was dealing with the reveal that Andrew was Lash, and that went in a lot of good directions. What makes it good is in a lot of ways hard to really express. A lot of the episode is carried by Ming-Na Wen and Blair Underwood, with just strong actors working with strong writing. I could point out individual, obvious moments, like May admitting that she didn't know that shooting Andrew wouldn't kill him, but it's not just the individual moment. It's a combination of all these moments building on top of each other, and there are so many small ones that it's difficult to give them all credit. 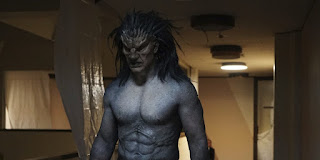 What really impressed me is how well everything in this story fits together. They have either been working towards this end specifically since the beginning of the season, or had an amazing case of serendipity. Everything about this story fits together really well without having to really stretch credulity. Lash has been picking off specific Inhumans, which he got from the ledger that Jiaying kept in Afterlife. Lincoln knew about it, and Mack knew that Andrew had it. To keep anyone who wasn't Inhuman out of it, Jiaying rigged it, so Andrew transformed when he tried to open it. Andrew has been putting off approving Inhumans for the team so he could kill them, he was able to add higher stakes to the Hunter-Ward storyline earlier, yet could survive the attack, and Werner saw him so that when he was sought out by May, he could tell her about what happened. All of these things fit together without making any extreme jumps in logic, and made Andrew the only person who could be Lash, while the writers didn't try to outsmart the audience when many people figured it out ahead of the reveal.

It's simple to say why all of that worked, but not particularly interesting to talk about. It's similar to how The Flash managed to be so good in handling Zoom, making all of the elements fit together and doing everything with a purpose, which is so much easier said than done. It's about good writers doing good work, and usually they make it look so simple that it's easy to overlook how difficult it really is.

I've liked Agents of S.H.I.E.L.D. since the beginning, but this season is starting off especially strong. The side plots are always a little weak, but the main focus tends to drown all of that out. This isn't the show at its best - that would likely be "4,722 Hours" - but it still delivers a strong episode. It's a weird show to write about, but very much worth following.
Posted by Zac at 12:00 PM