This was originally posted as a review for Word of the Nerd. Reposted here with slight modifications.
I'm not overly familiar with Adventure Time, having seen just enough to know that I like it without having gone through the entire series. That is important because it gives me a somewhat strange perspective on this issue. The particular reason is that this issue attempts to give some backstory to Marceline before she became a vampire. To me, it was an enjoyable story, if not particularly deep, but it's likely to be controversial to people who like the fact that Marceline's backstory is mostly kept a secret. 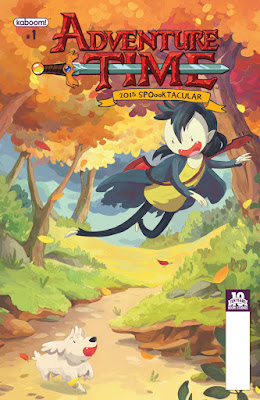 While I understand their hesitance to have the backstory expanded on, it's a fear that's not really matched by what's actually in the book. The story is a short bit of Marceline trying, and not entirely succeeding, at protecting a group of humans from vampires that are trying to kill them. She also has a dog named Schwarbl, and that's about where the real details or anything really relevant to her character in the show ends. That's not even considering how "canonical" the comics are, which is something I'm not even remotely qualified to judge.

Getting past those nitpicky details, I have to point out just how great I find it to look at what I see in the credits at the front of the book: Hanna K. From the writing down to the lettering, she is credited for everything in the book, which is not something you see often in comics. It's kind of hard to tell how much of the art is her style or how much of it is due to the style of the show. Given that she also works as a storyboard artist for the show, that would be a particularly hard judgement to make. It looks like it fits perfectly with the show, except for one little stylistic choice: rather than the "perfect" look of the drawing in the show, this looks hand drawn, with a paper texture on everything. It's a choice I like, especially when added to the lettering, which is hand drawn the whole way through. This is about Marceline in the past, and it looks like she wrote down the story so that she could share it with people later, which all those little choices make just a little bit more real. 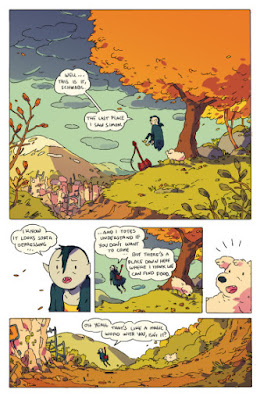 It's called "Spooktacular" in the title, but it's not particularly trying to be scary. Instead, it's just about monsters in the surface details. Marceline later becomes a vampire, and she's saving humans from being attacked by vampires. Even the often used deeper or more disturbing implications are muted; as that kind of deeper horror tends to go, these humans constantly trying to move around and hide from the vampires isn't nearly as scary as other places it could go. It's a different take than I expected, but it helps keep the story lighter, which I always appreciated from Adventure Time; even when there are disturbing things underneath, watching it is almost pure joy.

This issue was fun to read, but also not the most substantial comic you'll find. It feels just like Adventure Time to me, with its whimsical sense of fun, but there's not a lot other than that. I don't know how people more familiar with the show would take it, and it was admittedly somewhat slight, but I enjoyed it a lot for what it is.