This was originally posted as a review for Word of the Nerd. Reposted here with slight modifications.
Johnny Red will get a lot of attention just for the first name listed in the credits: Garth Ennis. He has a great reputation in comics, so any new releases with his name on it are going to get a lot of attention from the beginning. Even with his writing behind it, Johnny Red is a bit messy trying to get to the point that it becomes an interesting story. 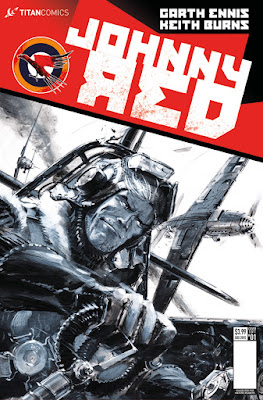 The reason it feels so messy is that the story they really want to tell doesn't start until late in the issue. Somewhere around the 2/3rds mark, we start to actually get the story of this particular airplane and its pilot. Once we do get there, it starts to get really strange and compelling, but it's a long road to that point.

So, what do we spend the first 2/3rds of the book on? We're following Tony Iverson, a very rich man with a love of planes, trying to figure out the history behind this specific one that he recently bought. He's trying to get it restored and discover its history, which eventually leads to the real story. Most of it, however, is spent on scenes that are rather boring. Tony goes to different experts on the planes, all making vague intonations about being able to help a bit, or knowing who else can help tell the story, and it's just not engaging. Even when we get to the man who actually saw it in action and can tell the story, he seems like just another expert who doesn't have any answers but knows who might.

The World War II story is told through a pretty classic framing device: this old Russian man who was there is telling Tony the story. Because of that device, the book manages a legitimate use of my least favorite comic storytelling device: narration. It's there to ease us into the story, and it makes perfect sense in that frame, so it's a rare occasion of narration really working in a comic. I still question the need for that draming device, but it at least makes for a good use of narration. 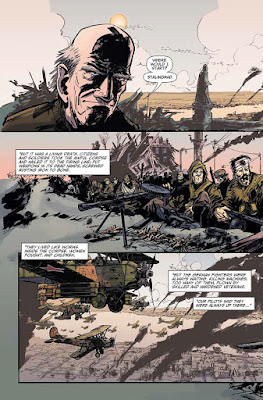 I've come this far without talking about Keith Burns's art, and there's a reason for that. I just did not find it memorable. It's going for something, since early scenes with the planes are laboriously and lovingly detailed. Even if they're not accurate, they feel very believable. The problem is, by the time I'm on the next page, I don't even remember what I just saw. The art is perfectly serviceable, never getting in the way of letting the story work or being distracting, it just isn't something that I remember when not looking at it.

The problem with trying to put out a verdict on this issue is that there are two different pieces that feel very different. The World War II story is interesting and makes me want to read the next issue. The rest of it, setting up that story, is such a bumpy road that the issue overall just isn't all that good. So, I have to come down on it pretty split; it's not an issue that's all that good, but where it ends off leads to me wanting to read more and see where it's going in the next few issues.