This was originally posted as a review for Word of the Nerd. Reposted here with slight modifications.
As a small warning, it is impossible to talk about Zodiac Starforce without making constant references to Sailor Moon. It's very much based on it, being part of the magical girl genre, but several elements are so specifically and strongly influenced by Sailor Moon that I can't help but reference it all the time. Despite all that, Zodiac Starforce is not a carbon copy, borrowing elements and taking them in its own direction so that it stands alone as a good series in its on right. 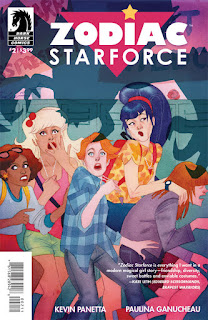 While the highlight of this issue was the action sequences (more on that later), the rest has some problems that don't kill the book, but are a letdown after the first issue did a good job. The interactions between the girls were built on lack of communication, which is never a good place for the story to go. Most of their conflict is down to the fact that everyone is trying to make sure that Emma is okay, and while she's not, she's trying to hide it from them. The fact that they're completely unable to communicate makes the whole thing feel like false conflict, which is never good for a story.

There's also a bit of conflict with girls who aren't in the group, and that struck me as odd as well. Not only did they not even mention Alice, who was a big deal in the last issue for leaving them and joining a different clique, but they put the focus on someone else, who is both a social antagonist to them and in league with the monsters. The problem is, this character turn is so heavily telegraphed that it just falls flat as something too obvious, but it does lead to the large action sequence, which serves as the best part of the book.

We saw a bit of action in the last issue, and we got to see the girls in costume and fighting, but how it plays out in this issue is so much stronger than it was there. It makes me want to see as many action sequences in the rest of this series as they can make. The girls are really working together as a team here, using their different abilities and fighting together to take out the monsters that attacked the school. As much as the last issue focused on character growth, this really hammered home how close they are and work as a team.

While their costumes were in the previous issue, this gives them the chance to really shine. The book looks good in general, but the costumes really stick out here. Trying not to make comparisons to Sailor Moon is basically impossible here, since they are a staple of the genre, but the way they manage to look like that but also distinguish themselves says a lot about the book. Starting with the obvious, the patterns are influenced by signs of the zodiac, which is mostly just a different set of celestial bodies. The most interesting change in the look is that they are based more on athletic wear than school uniforms. It can mean many different things, depending on how you want to interpret it, but I mostly take it as simply being more practical while not losing any of the appeal of the costumes, however you want to interpret appeal. They're different enough and still work great as costumes.

There was a lot of good in this book, even though there were some bumps along the way. If it interests you, go back to the first issue and start there, but it is definitely worth a look.