This was originally posted as a review for Word of the Nerd. Reposted here with slight modifications.
I first picked up Butterfly after seeing the first issue on the shelf, the cover grabbing my attention. As it came out in single issues, I liked the story, but as with any short miniseries, there's always the feeling that you need to get it all together to really get the full story. Now that the hardcover collected edition is out, this is a good time to go back to Butterfly­ and take a closer look.

For being a story about spies and espionage, there is relatively little plot in this book. There is some, with some expected twists and turns that spy books take, but that's not what the story is about. This story is about Rebecca and David, codenamed Butterfly and Nightingale, and how they became the spies they are and how it all falls apart. 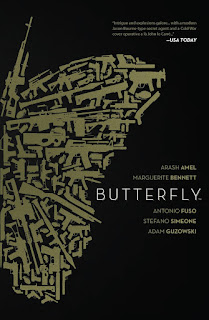 It's important to note how much this book is about character much more than plot, since many elements that would otherwise be lazy or messy storytelling work much better in that context. The most obvious example in this book is the use of narration. It's usually a pet peeve of mine, since comics should be able to use their visual nature to portray everything and only use narration when visual storytelling fails. While it occasionally leans a little too hard into the narration, but the majority of the characters' thoughts would be impossible to show visually without causing confusion. Instead of lacking confidence in the reader understanding or trying to do the artist's work for them, it's diving even deeper into the characters than is possible visually.

There are also a lot of flashbacks, another potentially messy element. There are some that work and some that don't. Specifically, the focus on Rebecca growing up is both done sparingly, and in moments when it is particularly relevant, either literally or thematically, to what is going on in the present. The flashbacks to David's past are not only telling his story, but also doing it in reverse order, starting about 20 years before the present and going backwards about a decade after that. The story didn't make sense until finishing it and putting them back together in order, and telling them in reverse order didn't add to the story at all. It would even have made more sense to just show them as they were relevant to the story, completely out of order, just to give them an anchor to what was happening in the present, rather than try and present them in reverse order, which just made it confusing and added nothing to the way it was told. 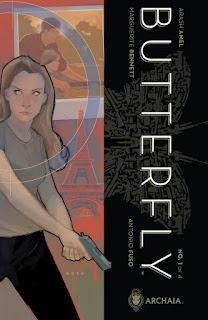 Until I checked the credits at the beginning of the book, I didn't realize that two different artists worked on this series. Antonio Fuso drew the first two issues, and Stefano Simeone drew the last two, and there were so few difference between the two it was hard to tell there was a change. There's more of a difference between the present and flashbacks, and those were already very similar. Most importantly, both artists managed to keep the same pace for the book, really driving home the character-centric nature of the story by stretching time out with long, lingering shots. As an example, the first few pages show David teaching a young Rebecca shoot, and it keeps us in that moment with long, lingering shots. There are several panels showing scenes that take moments, showing David helping her to aim, Rebecca pulling the trigger, then a gunshot sound, then the bottle breaking or a bird being torn apart by the bullet. These scenes are slow on purpose, even when the plot amps up later, never letting the story get too fast to stay focused on the characters.

As with all collected editions, beyond the comic itself, I always want to see extras in the back that add to the story that is already there. I love seeing how the story is created almost as much as the story itself. This one delivers on that; after the standard cover gallery, it shows a few pages of the book in three different stages: script, inked, then colored, referencing the page in the book so you can see the final product. It's only for a few pages, and is lacking any commentary from the creators, but it shows by example how the story developed, what little things were changed before they got to the final product, and the other parts of the creative process that are so interesting and not seen enough from the outside.

I liked this book when it was in single issues, and it stands up as a good story in collected form. It may not be something that jumps out as something great, but if you think you are interested, then check it out, you won't be disappointed.