Angel and Faith started in a weird place for Season 10. The last season was a lot to live up to, and it started with the title characters separated by the Atlantic Ocean. While it's never been up to the level of last season, it's worked up to a solid part of the Buffyverse this season. Some of the things in this issue and the last arc have made me worry, and I'm hoping it can right itself.

The common element to most of the rough spots, in both series, is the Archeus plotline. It felt like a strange addition to the mythology so late in the series, but it has only snowballed. Whenever he's part of the story, the plot and mythology become so central it crowds out the characters, which really hurts things. 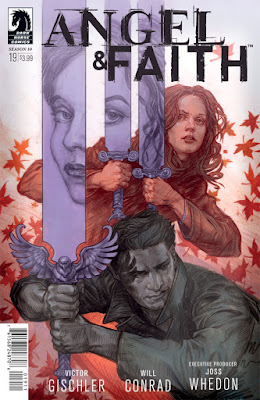 Despite being the title characters, Angel and Faith have spent more time apart than together. They're at least on the same continent now, but still barely interact. Their dynamic made last season and the idea of an Angel and Faith series work, and not seeing it takes out what made the series tick. At this point, it feels almost like a running joke seeing how much they can separate the title characters.

Not that the other characters are faring much better. Drusilla is back, like I hoped after the last issue, but she's still doing what any generic vampire mastermind could do. She's done little but making vague allusions to death and destruction. The same, without the evil side, is coming from Nadira, who was really a great character last season. She doesn't feel right as the vague oracle character, especially when she's just used as a plot device here, instead of being the complex and conflicted character she was last season.

If history is any indication, this is the first of a two-issue arc, with issues 21-25 wrapping up the season. Instead of building up to the final arc, this feels like killing time until then. That's best illustrated by Fred/Illyria and their weird conflict. Every now and then Illyria will come out, then when she's under control, Fred will be worried about how little she's in control. It has to boil over eventually, but it just keeps being brought up over and over with no resolution, which can only happen so many times.

I don't like being negative. I love this series and these characters. I was in this same place at the end of Buffy Season 9, and that was not a good experience. I hope I'm freaking out over nothing, but this has been shaky recently and is feeling familiar. There needs to be a strong end game; a bad ending would make the problems more prominent, but a good ending would make them more forgivable. I hope for that because I love these characters and this series, and want it to be good.
Posted by Zac at 12:00 PM