The Flash ended a surprisingly great season on a surprisingly great episode, with the minor exception of a slightly cheap cliffhanger to end the season: Barry running into a singularity that was threatening to destroy Central City. This ending led to a lot of speculation and expectations for the story to pick up in a particular way at the start of Season 2, and it didn't really go in that direction. Many things that were taken as a given didn't happen or happened differently, and while this is still a strong episode, that and the strength of last season led to a lot of people thinking this is somewhat of a lackluster premiere. 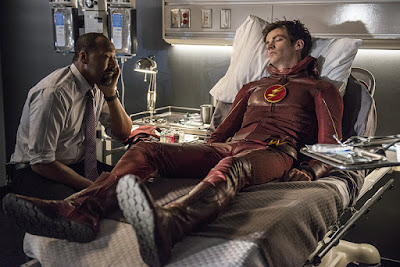 For one, this episode leans heavily on the flashbacks, but not for a very strong reason. There are small flashbacks to Barry as a kid, when Joe is trying to help him shortly after taking him in, and that's where the flashbacks really work. For that, they're being used to show how the past mirrors what was happening in the present, more for thematic purposes than dumping information. The problematic side is filling in what happened right after the end of the first season, as they're trying to stop the singularity, since there was no need to show it as a flashback. It just serves to make the beginning of the episode unclear, since we don't understand things like the characters do. There's no reason to hide it, since all of the characters know what happened, and all it does is make the audience feel like they're out of the loop. We could have seen Ronnie's apparent death (he seems to be in competition with Sara to see who can seemingly die the most times) and known from the beginning exactly what had happened and why Barry was pushing everyone away. It would make more sense as a storytelling move, since not really understanding someone's motivations is a dangerous way to try and play a story out. It even gives them a more action-packed way to start the story, which is usually the superficial reason why a story would be told out of order like that. 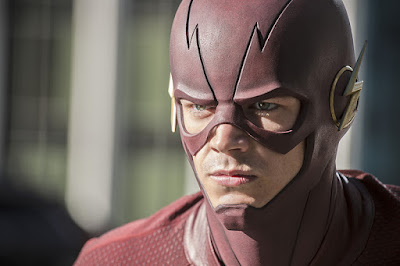 The show also took an uncharacteristically slow route to starting to deal with its big ideas. Usually, it's thrown itself right into the big things, especially with the fact that time travel was introduced around the 2/3rds mark of last season. While we're starting to get hints of the multiverse that we were promised before, it's still just slowly picking up in the background. We get the hints with Rothstein having died but also being Atom Smasher, and Jay Garrick showing up is a sign that things are going in that direction, even if it probably doesn't mean anything to people who were already following the news about the series. I also find people's reactions to Jay Garrick a little strange; while he looks and sounds right in what little we see of him, there's really nothing there. We haven't seen him as a character yet, and getting this excited about the idea of him there before we've seen the actual execution is getting a little ahead of ourselves. I don't doubt that they'll handle him well, but we haven't actually seen it yet, so the praise for him seems far too premature.

I promise that my complaining will be over soon - I'm not used to that with this show, so I have to get it out - but I also had some trouble with Stein in this episode. I don't know if he was just saddled with too much technobabble dialogue, but something about his part in here just felt off. I don't know if the lines he was given were just a little too much to try and pull off, but a lot of the time his presence was just not what he could be. It seems that they're looking to, at least temporarily, move him into the Harrison Wells role on the team, which he seemed a good fit for at the end of last season, but in this episode it didn't seem to fit quite as well. He did have a great scene when he named Atom Smasher, where his awkwardness and interaction with Cisco was spot on, but the rest of his performance was a little off. 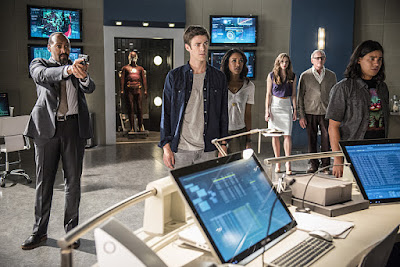 I'm going to start on the things that I like now, and the first one is in contrast to a lot of people. On the obvious side, it seems that John Wesley Shipp really did not want to do 23 episodes this season. The thing is, I don't have the problem with how they did it that a lot of people do. It was a little more rushed than I would have expected, but leaving town feels perfectly in character to me. Barry's life has been defined by the fact that Henry was in prison, and what direction would Barry's life go in if he'd gone with his plan, the two of them living together again? While in prison, Henry could never get Barry to stop trying and move on with his life, but he can force Barry's hand now, make him move on. He's done what he had been trying to for 15 years, and now that his family is back together, the temptation for Barry will be to regress to the life that he knew before, and Henry knows that. He's forcing Barry to really grow up, even if it's really the hard way.

And to another of Barry's dads, we have Joe being the series's secret weapon yet again. I've heard some people criticize the fact that Joe is a little too jokey or not serious enough, but that's exactly what makes him work. He's the father figure/mentor to a lot of characters, and usually that's an overly serious role, meant to keep everyone else in line or under control. He does those things, but he's not overly serious or humorless. He's able to be when he needs to, such as in the flashback to Barry as a kid, but he doesn't always need to be like that. He has a sense of humor and reacts to things like that when it seems realistic, like when Iris starts quoting his words back to him, or back in the last season when Barry showed him the voice modulation he was able to do. He's often the outside, more normal perspective, being the closest to normal human of anyone there, and your normal person is going to have a sense of humor sometimes. He uses that to add a lot more to the show than Lance, his closest equivalent over on Arrow. 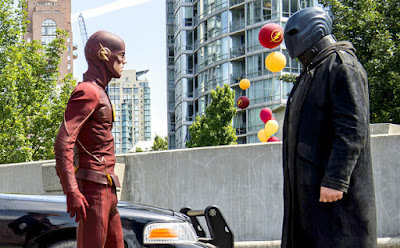 Cisco also continues to be a surprise, since I started off the first season not really liking him. I didn't like him much because he felt too much like the stereotype of a nerd, but they embraced that aspect of the character so much that they managed to make it work. He has a small part relevant to the greater story with seeing into an alternate universe with Atom Smasher, but for the most part, he's the comic relief. He's never the idiot, like usually comes with the comic relief, but he's responsible for the best laughs in the episode: accepting Stein as part of the team and a metahuman namer, and when he thinks he's Barry's best friend.

Iris and Caitlin fill out the rest of the team, and they have an interesting role to fill in this. While Caitlin's part in the story makes perfect sense given everything that happened, it's a little too similar to how she was in the pilot episode. They should be able to do more with her soon, especially depending on how they resolve her working at Mercury Labs; it wasn't clear if she was still there, or went back to STAR at the end of the episode, but if she's doing both, it should add some interesting elements to the story. Iris is remarkable more in how unremarkable her presence is. She feels like she slots right in to Team Flash without any issue, and is feeling like she has some purpose in what she's doing there, unlike most of last season. 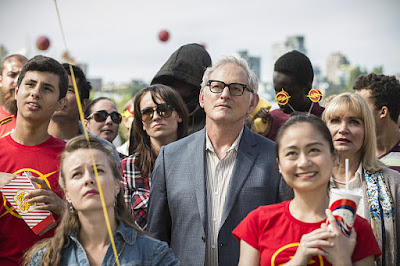 This was a good episode, but felt a little lacking because the first season was legitimately great and because it messed with expectations. I actually think that the Arrow premiere was a superior episode, possible a first for the two shows, but this was still very good. It's just not quite back up to the nearly impossible standard that they set last season, and getting back to peak is still attainable. Now the only thing to do is to get to the next episode and see what they can do.
Posted by Zac at 12:00 PM