This was originally posted as a review for Word of the Nerd. Reposted here with slight modifications.
I did not expect to come back to this series. When I reviewed the first issue, I loved the way that it looked, but found the story very lacking. Still, the art was so good that, when I saw this comic come in, I decided that I wanted to give it another shot, just to see more of the art if nothing else.


This also runs into an interesting issue with reviewing multiple issues in a series. While I have done it before, I don't tend to do it often, as without a huge shift in creative team or story, there end up being a lot of the same positives and negatives from one issue to the next. For better or worse, this series hasn't had a shake up, which makes a lot of the same things apply to this issue as the previous. 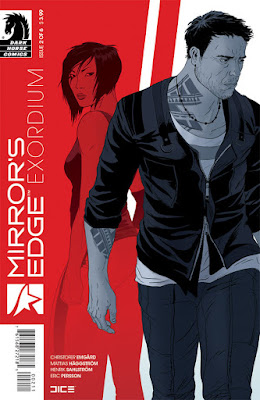 For one,the art is still great. In fact, with this issue, I think that I love it more than I did before. While it can't perfectly recreate the first person feeling from the games, the scenes of Faith running across the city continue to suck me in completely. Even in a particularly notable setpiece, in which Faith takes advantage of a low flying drone, while it's very dynamic and exciting, it also looks effortless.

On the flipside of similarity, the story continues to be a bit of a mess. It's not even the interesting kind of messy, instead following a very standard type of plot and sequence of events that I feel like I have seen so many times before. Faith is continuing to earn the drawing from her mother, and while that could be a great motivation, we don't really care about Faith. If the story built her as a character beyond her skills and seeking connection to her dead family, it would mean so much more, but this is not that place. Instead, we have no real reason to care about what she's trying to do. 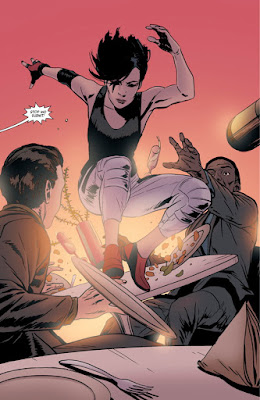 At one point, she is starting to go through the token self-doubt, where she thinks that she might be working for the wrong person. Not only is it hard to care because we don't really know her, she also is very obviously working for the bad guy. There is nothing about him to make us think that he is the good guy, so there's no suspense to the idea. The scene where she is having that doubt also happens to be my favorite in the book, but not for the reasons they might have intended. While Faith is having this doubt, she's sitting on a rooftop talking to a friend of hers, and he's eating a sandwich as they're talking. During this scene, he gets into a fight with a random bird, who ends up stealing his sandwich. The scene ends on that note, but we never come back to the friend or the bird again. It's the most out of place scene, but the fight with the bird is actually funny. It's not the most intelligent humor, but it does exactly what it needs to, except that the scene is completely unnecessary. I end up liking the scene, but I am completely baffled by its presence.

Then the issue ends on a cliffhanger, but at that point, without a bird fight, it's mostly unable to interest me in what's happening. It would be predictable except that I didn't care enough to try and predict the story, and I don't know what's going to happen next, but also don't care much about that. The story fails to engage any time it tries to force its way to the front, ahead of just marveling at how good it looks.

I really don't think I'm coming back this time. There was just enough in the last issue to make me think it would be worth coming back to this issue, but there's not enough left to bring me to future issues. It's a shame to have to abandon this art, but it's hard to care about it when the story falls completely flat.