There are a few creators that I will be interested in anything that they do, and Skottie Young has become one of those for me. I just had so much fun reading his Rocket Raccoon series, and now he has a series, I Hate Fairyland, with Image? No need to convince me further, just let me have the book.
A lot of the things that are in this book are ideas that I should be tired of, or have seen more than enough of. It's a spoof of fairy tales, featuring a cute little kid who acts way too much like an adult. I shouldn't like these tropes, especially since they're not exactly the most original. It even starts with a cheap joke that I love, with the little girl being named Gertrude, which has no real right to be so funny other than I would never associate that name with a little girl. In fact, it never really avoids the cheap joke whenever it could make it, including a scene where Gertrude eats mushroom people and starts hallucinating right afterwards. The key is, it never stops having fun with these ideas. 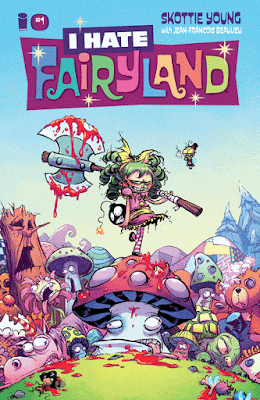 Part of the reason it has so much fun is that it is completely about refuge in audacity. Between this and Rocket Raccoon, I'm starting to see a style that Skottie Young seems to love writing: small and cute, with a love of over the top murder. As mentioned before, Gertrude eats a number of mushroom people, similar to Toads from the Mario games, and it is in such an obnoxious, graphic style that it starts to become hilarious. She also at one point pulls out a gun several times larger than herself and kills everything you can see because they might have seen her kill the moon. Not only does she do this, she enjoys every minute of it, which you will either find repulsive or hilarious, especially since she looks like a seven year old girl, cackling with glee while killing and eating all manner of sentient creatures.

Of course, Skottie Young is just as much about the art as he is about the writing, and that doesn't disappoint. I'm not really sure how to describe his art style, other than it is definitely Skottie Young art. Between the style and the design, it looks like he took his Rocket Raccoon art and instead started drawing Adventure Time, and it ended up with this book. The closest to a description I have is "Colorfully gruesome", referring to her love of murdering and eating all the sentient creatures around her.

Adding to the humor is the lettering, which makes me want to try and hire Nate Piekos if I ever did a comic. He seems to have been given free reign to do whatever he wants, which is especially great in something that already goes so big and over the top. He takes one of the dumbest jokes I see often, replacing profanity with harmless words like "fluff" and "Muffin huggin" and similar. However, those words are not just spoken, they are screamed, and you can tell exactly what is being said just from how he draws it. There is also one character's grandiose riddle, which just from the words is completely over the top, but for additional emphasis, he changes font around ten times on the page, just to add that extra emphasis to highlight the strangeness of that character.

This is a hard comic to summarize, other than that it was a lot of fun. The story was fun, the look of it was fun, and I will definitely be coming back for the next issue. I have no idea what will be coming next, but I'm here for the ride.
Posted by Zac at 12:00 PM