Even after reading it a couple times and thinking about it, this issue feels a little strange. Beyond just my completionism, I was drawn into it when I saw that they would be bringing back the ghost of Anya, a character that they seemed to have abandoned after bringing her into the early part of the season. The rest of it didn't strike me as being all that interesting or important, but it took up just as much of the issue as the Anya part of the story. 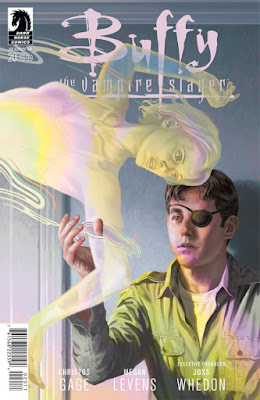 All of the conversation about this issue is going to be dominated by the implied/overt politics of the interactions between Buffy and Spike. Specifically, they're dealing with an Incubus, a demon who forces himself on women, and his victim is a woman who works in a shelter for abused women. As you can guess, this part of the story foregoes subtlety completely, especially as the characters are dealing with their own pasts. Specifically, they go back to Season 6, dealing with when Spike, without his soul, attempted to rape Buffy. Talking about this is walking into a minefield, but from just a story perspective, it's interesting to see them directly dealing with this part of the story that could go ignored, and they seem to deal with it like people with complex reactions and motivations. It's not a political screed, it's about how these characters deal with this situation, and they handle it in a way that I believe.

What drew me in was ghost Anya, and I'm not entirely sure what they're doing with her part of the story. Without giving up what they're doing, they seem to have taken what could be a simple way of dealing with the story, and instead choosing to go with a more complicated version. It's not even immediately obvious what benefit the more complicated version they have here gives; instead, they seem to be taking the most complex route just because they can, which is never a good way to take a story.

I'm just not sure what they're trying to do here. Between this and Angel and Faith, the last few issues have been meandering, and not quite up to the level I was hoping for. There have been lower points in the Buffyverse, but where they are now is not inspiring that much confidence in where it's going in the future.
Posted by Zac at 12:00 PM