This was originally posted as a review for Word of the Nerd. Reposted here with slight modifications.
I don't know for sure, but it feels like The Paybacks is a concept that has been done before. It has to; taking out loans to get the gadgets to become a superhero, then needing superpowered repossessors when you cannot pay feels both original, but is such a great idea that someone has to have tried it before. Unlike the hypothetical version I can see in my head, The Paybacks is not full of 90s grim and gritty, but is bright and colorful and fun, not like I've come to expect from most alternate superhero stories that publishers other than the Big Two love to publish.


This issue is a mix of multiple stories and even styles, all of them in service of the central conceit. There are two teams of repossessors, each having big superpowered battles, though we really only spend serious time with one of there. There's a superhero that feels like a parody of Batman with Rorschach's love of manifestos, playing up the worst kind of stereotypical superhero tropes. There's a bad superhero story going on until it runs straight into the first team of The Paybacks, at which point the tone changes so quickly it should by all rights break the story in half. Since it's played for comedy, it manages to work much better than it ever has any right to. 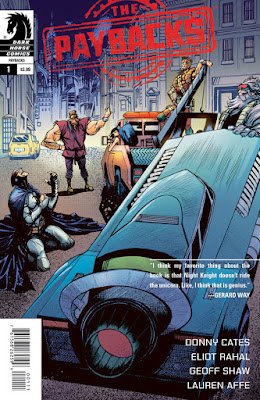 The team of Paybacks off in the background of the story is the root one of the few problems I have with the story. They are in this weird place where they should either be in the story less or more. They could be removed completely and have the main team serve their narrative function, or be another set of main characters that we get attached to, but instead they take up a spot somewhere in the middle, adding too many moving parts to the story for what amounts to little more than a plot device.

The intermediary between the two teams is The Driver, who makes an interesting contrast to something else I recently reviewed with a character using the same name. Both are complete ciphers, but this one manages to be more interesting. The difference is that this one shows some personality beyond just professionalism, though he is also boosted greatly by the van. He is very insistent that it is not a van, and he is right, but only because it is closer to a party bus if it warped reality, which somehow stands out in an issue full of outrageous ideas.

The art in this book is just as outrageous as the ideas in there. When the rampaging dinosaur in a mad science lab is only about third or fourth on the crazy idea/design list, you know there's something special going on. Everything is bright and colorful and going for full Silver Age in the audacity of everything you see. Even compared to all of this, I have to give credit to the "not a van", where the story decides that it is going to throw more weird than you can probably handle right at you, but you'll come out the other side feeling exhilarated from the ride.

As a first issue, this does its job perfectly. Yes, I have a few problems with the story, but it makes me really want to come back and read the next issue, which is everything the first issue really needs to do.