This was originally posted as a review for Word of the Nerd. Reposted here with slight modifications.
Admittedly, EVE: Valkyrie has an uphill battle to fight as a comic series. It is based on a spinoff of EVE Online, which is a Virtual Reality Space Combat Video Game, a string of words that feels like it's designed to blow your mind with its potential. Even without that to live up to, it looks and feels like a rather generic version of a story about space combat, which is disappointing.
To its credit, everything looks like it should. Checking out the trailer for the game, the look of the ships matches pretty much exactly. That doesn't make the designs less generic overall, but at least they are consistent. The things I couldn't see in the trailer, such as the armor/military dress all look okay in that they don't look worse than I would expect, but also are just kind of average. 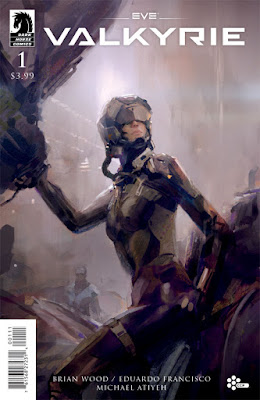 Looking at that trailer, there seems to be the same story going on there as in the comic. In the trailer, you hear Ran Kavik reporting as she goes on an escort mission, and that happens in the comic in much the same way. The story here fills in the gaps, giving her a backstory explaining who she is and why she's in the military, but none of it is all that interesting. As much as it's a cliche, it's accurate to describe her problems as something very much like "Daddy issues", and it's something that I've seen in so many stories that, when it's all there is to the character like it is here, it drains most of my interest easily.

Of course, there are other weird problems, storytelling choices that I don't understand and seem to not have the impact they were supposed to. For one, they handle flashbacks inconsistently, which makes it difficult to tell what is going on and when. The first time there are flashbacks, it's very clearly labeled and can't really be mistaken for anything else. However, there is another time that the flashbacks come up, and when that happens, there is no indication given. Thanks to her character design, Ran looks very similar in both the past and present, and it's just jarring to jump back and forth in time without a strong indication of it happening. If she didn't look so similar as an adult and child, it wouldn't be a problem, but it has a tendency to confuse things. 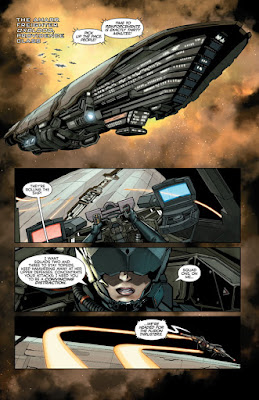 The other problem is how other characters react to Ran and her father. He was blamed for a military disaster, and that has a negative impact on her career, for obvious reasons. What doesn't work is a single scene, but it is so jarring that it throws the entire thing off. At one point, a fellow pilot tells her that he's disappointed that she's not going into combat, since everyone was betting on when she would die and he had that day chosen. It makes some story sense, and there's likely a way to construct that joke, but it just doesn't work in this context. It's the kind of joke I would love if it worked right, but it's also the kind of joke that need to be constructed perfectly, otherwise it just comes across as unnecessary.

My final problem is probably the one that I talk about most in reviews: ending cliffhangers. This issue has one, and it's actually something that I want to see the aftermath of. There is a lot of padding in the story to get it there, however, and it would have moved much more smoothly if that came at the 1/3 point in the story, hooking you in with an interesting idea upfront. Instead, we spend a lot of time with unnecessary flashbacks and exposition, which could have been skipped over to let the story flow more smoothly.

This is definitely a video game tie-in comic, with all the bad baggage that comes with that category. I wanted it to be better, and where it leaves off could turn into an interesting story, but I don't have much hope based on what I see.