I loved the first issue of The Paybacks, and that puts the second issue in a bit of a difficult place. Now that the idea is no longer so new, it's time for the book to really get into the story that it will be going forward. This is the problem all second issues have to deal with, and it's hard to contend with. Here, this issue isn't quite as good as the first and starting to show weaknesses, but it's still good enough that I'm not going anywhere. 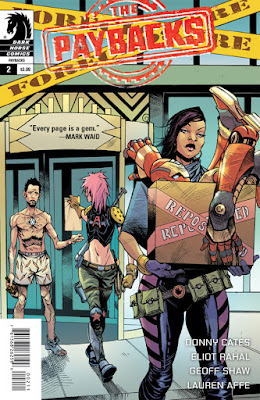 The biggest problem it has here goes back to a hidden weakness in the first issue. Specifically, we didn't really get to know the individual characters. A couple of them, like The Driver, are fine because they were broad characters with easily visible characters hooks and gimmicks, and they have no problems here. We didn't really get to know the rest, and now that they're trying to pay off character beats, they're not really having the impact they could. The fact that the cast is so large only makes the problem a little more amplified, which will only become a larger juggling act in future issues.

There was also a plot point about how unsavory the business of superpowered repossessors really was. In the first issue, when they conscripted Night Knight, it wasn't clear that all of the Paybacks team was made of failed heroes, but this issue starts to make that pretty explicit. That part of it worked, but what didn't was the references to Mr. Pierce, who runs the whole operation, and how sketchy that makes it all seem. It seems obvious to me that it would be sketchy, and we're not enough in the characters' heads to understand why they would think otherwise, so it just felt like them trying to catch up to what we already know. 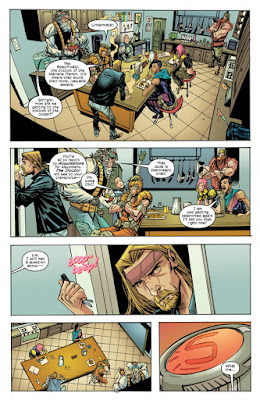 The reason why that particular dark or shady idea didn't impress me that much was because there was a much better one already hidden in the issue. At one point, one of the Paybacks is being attacked by one of the "heroes" who is about to kill them. They defuse the situation by basically threatening said "hero" with bad publicity, at which point the situation calms down. The idea that one of these "heroes" is so interested in the good publicity that it's the only thing to keep them from killing strikes me as a more interesting idea to explore, and it's already right there in the story.

I've been a bit too negative so far, but only because this has been so good that the negatives really stick out. I loved the sense of creativity that the first issue had, of just about anything could happen or could exist, and that continues here. The particular stand out moment was the discovery that one item they had to repossess was a gun that uses pieces of someone's soul as ammunition. There were several more in here, and I loved seeing that creative element carry over into this issue.

I still really liked this issue, despite my negativity. All the positives continued into this issue, and I only bring up the negatives because they stick out after so much good. Still, I'm in no danger of dropping this series anytime soon - it's just too much fun.
Posted by Zac at 12:00 PM