This was originally posted as a review for Word of the Nerd. Reposted here with slight modifications.

Going off of the synopsis, The Rook sounds like something I would absolutely love. The idea of someone fighting a one-man war against a time-traveling terrorist is the kind of high concept thing that I love to see people do. While I like the concept, this issue doesn't do a lot to give me confidence that the rest of the series is going to match up to its potential. 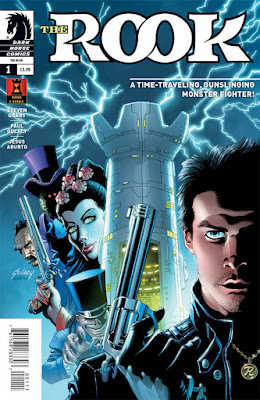 The first problem I have is with the protagonist, Restin Dane. It's always a bad sign when the protagonist is a problem, and Restin suffers from not being all that interesting. He has a potentially fun backstory, that a relative was a contemporary of H.G. Wells, and Restin is convinced that that relative made an actual time machine. It's a little convoluted to explain his interest in time travel, but it mostly works. The problem comes in when we realize that he basically has no agency of his own. He is eventually set on another path by the older version of himself, but that's just the time travel equivalent of doing something because it's destiny, which makes it hard to really get invested in what the character wants.

I'm not going to say exactly what happens in the story, which should be obvious from the outset. Predictability is not in itself a bad thing, but it is a problem when the story is slow to get to where it really wants to go. This entire issue is marking time until the end, when the real story can start. I take small solace in it not ending in a cliffhanger, but that doesn't make that much of a difference, all things considered. The slowness of most of the issue is made worse by the way it starts, with an action sequence in the past featuring the older Restin. The issue never really builds itself back up to that point, making the beginning of the book feel like a false promise. 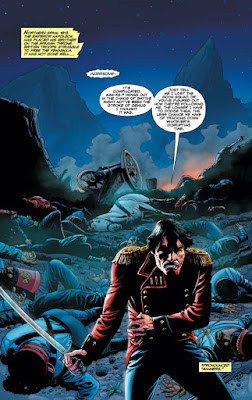 The art comes with its hits and misses. One problem that I had was trying to see old and young Restin as parts of the same person, and they didn't come across, either in appearance or personality. There's not quite enough similarity to how they're drawn to make it obvious that they're the same person, just separated by age, and that makes a lot of this harder to swallow. On the positive side, it has a great variety in settings, all of which look very distinct, something very important when traveling all over time like they do. It avoids common pitfalls of portrayals of the past, like how France in the 1810s should look nothing like England in the 1880s, and they're easily distinguishable, from the look of the place to the clothing, to just about every important detail. It helps keep all the settings separate, even if we're not traveling between them all of the time.

All things considered, The Rook was not what I wanted it to be. It might pick up in the future, but what's here doesn't give me the most confidence in how this series will be going forward. As a #1, it fails to make me want to read the next issue, which is the most important thing it needs to do.