When I reviewed the Season 2 premiere, I was very mixed on where Gotham seemed to be going. Throughout the first season, it tried to take itself somewhat seriously, and I held it to those standards because of that.

Things seem to have changed. The last few episodes, the show has decided that it wants to have fun with its concept, to embrace the ridiculous. This show has always been a little silly and stupid, but now it's actually embracing that fact, which is not a direction that I was expecting it to go. While that makes for a much more enjoyable show, it also makes it harder to talk about. It's similar to trying to review a comedy, where trying to say what makes it good runs the risk of just repeating the jokes, trying to explain what makes Gotham so much fun runs the risk of just writing a recap of the episode.

Instead, I'll just look at a few of the things, to give a general flavor, and for this episode, it's The Merc. It comes up early in the episode as being where the villains tend to get their weapons, and my thought was that it was a specific person, the Gotham arms dealer. Instead, it's a Wal-Mart for illegal weapons. There are aisles, and carts, and a PA system, and people just go here to shop for illegal weapons. At this point, any seriousness from the series has gone completely out the window. Of course, it doesn't stop there, and leads to my favorite scene, which says a lot for an episode that features a rocket launcher and flamethrower, which we will return to later. Apparently, The Merc is so much like a Wal-Mart that they have to deal with shoplifters, but it doesn't quite go the way that I expected. While one of the arsonists goes there to get some explosives, he stuffs it in his pants, then tries to run when the police burst in. Gordon shoots him, and hits the explosives, causing him to blow up, pieces flying everywhere. 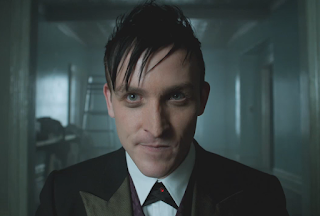 The campiness continues with Penguin, who throws himself into it fully. It starts with some subtlety, when he recognizes the Wayne family crest right away, which doesn't seem like something he would know. He later goes completely over the top, cutting off Butch's hand in a gambit to get him to infiltrate Galavan's people. This plan makes no sense, and can only work because Butch is still brainwashed, which I'd think would have been dropped as soon as this season started. In between those, Penguin brings in a woman to explain why the knife that Firefly steals is important (more on her later), and she goes into an explanation involving flashbacks to Victorian-looking Gotham, which only raises more questions than it answers. It does, however, give Penguin a great moment to threaten the old woman, in surprisingly not the dumbest line in the episode: "Tell me about this knife, or I will use it!" 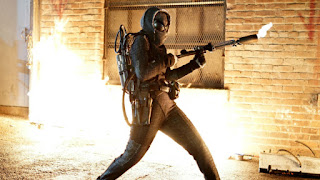 Then there is Bridgit, this world's version of Firefly. This feels like a character that I would create if I was trying really hard to pander to a target audience of me. She's forced by her arsonist "brothers" to set the charges and light the fire to start the fires. She's afraid of the fires at first, then realizes that it's a lot of fun and kind of wants to keep doing it. She doesn't do it with enough time, and gets caught by part of an explosion, which actually sets her leg on fire, which becomes a plot point. She keeps doing it, but makes herself a costume that also serves to protect her from flames, and in my favorite element, she uses a flamethrower as her main weapon. The only place that her story kind of falls down is that we don't care enough about the strike force to be invested when she kills one of them, but I'm almost surprised I'm thinking about the show on that level. It's actually trying to tell a good story, and it does that with her. The rest of the episode is still mostly ridiculous fun, but this part starts to rise above that a bit.

All of a sudden, Gotham has become something I'm really looking forward to, rather than a show I'll catch up to when I have the chance. Firefly is a good character that I'm glad they're using, but for the most part, this show is comfortable being fun and trashy, and it does a good enough job of that I'm ready to just let it.
Posted by Zac at 12:00 PM