Jughead #1
The first issue of the new Archie comics really sold me, and they're looking to go straight into the type of comic line that a lot of other publishers have. What gets me most interested is Erica Henderson drawing the book - I loved her art in Unbeatable Squirrel Girl, and seeing more of her here, especially since she seems to thrive with the strange and over the top, sounds like the perfect combination.

Famous Monsters Presents Project Nemesis #1
A comic about Kaiju, spinning out of a magazine that has been all about sci-fi and monsters that's been around since the late 1950s? I haven't been able to find any preview pages to know more, but its history sounds intriguing enough. 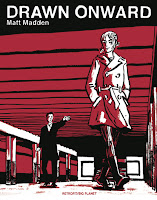 You've probably noticed from a lot of these that I tend to be a sucker for the straightforward but high concept comics. This is in a different direction; the story seems pretty basic, nothing high concept about it, just a story about a man and woman who run into each other and start being obsessed with each other. What is promising is that it's presented in a very different way, meant to be read forwards or backwards and eventually both, giving a different story each way. I'm always interested in experiments, and that takes this from a comic I might barely notice to something I am very interested in.

Deep Space Tragedy #1
Teenage robot rock band. Stranded on a remote planet. I don't know anything else about this, and I don't need to - I'm sold already.

Angel & Faith Season 10 #19
I found the last arc of this series seemed to be aborted a little too quickly, following the requirement that it end before Angel comes back. With this issue, they're promising that we'll be following up on Drusilla, the part I found most disappointing about the last issue. It looks like a good opportunity to follow up on the things that slightly missed the mark last time, and with this series ending at issue #25, we have to be getting close to putting things in motion for the concluding arc.

Dead Vengeance #1
"A Dead P.I. Solves His Own Murder." Okay, Dark Horse tagline writer, you've got me. There are other details here - 1940s noir, similar to The Goon, archenemy of Purple Gang - but that tagline is all the high concept I need to know.

Lara Croft and the Frozen Omen #1

While this might be just another video game comic tie-in, this has someone interesting attached. Corinna Bechko is a name I've heard but never been able to attach any work to, and this looks like a good place to find out some of what she can do. There's also the fact that the Tomb Raider franchise as a whole has become much more concerned with story, with all of that adding up to making me interested, if not overly sold on it.

Grumpy Cat #1
This exists. I don't think that I have that much to say about this other than pointing out the fact that it exists.

Garth Ennis is doing a romance comic. Yes, the person behind Preacher is doing a comic focused on romance. Well, much more than just romance, but it's designed as a romance comic with many more things in there, so... In case you need more convincing, here's what he said: "A Train Called Love is a story I've been wanting to tell for some time, largely because people keep asking me about doing a romance comic and the idea just wouldn't go away. This is what I came up with: guns, gangsters, mayhem, big white hoods, dubious films with horses, mad Germans, obscene phone calls, crazy ladies, total losers, hot chicks, dishy guys, movie stars, lots of narcotics, terrible bands from Williamsburg, taxidermy, incontinence, unrequited crushes, a big fluffy white rabbit and a rather unpleasant scene involving an escalator. Thus shall I explore the highs and lows of love."

D4VE2 #2
The first issue of D4VE2 had a great sense of humor, even if they let the joke run a little too long. Now that there's the possibility of plot progression given the cliffhanger at the end, I'm really interested to see where that's going. And the robotic homoeroticism, which raises a world of questions, but is perhaps the most bizarrely intriguing part of the book.

Axcend #1
Beta testing a video game brings it into our world and causes it to wreak havoc. After reading the preview pages, I'm still not sure about much more than that, but that's enough of an interesting concept for me. The question just becomes how well it's going to work in execution.

Dark Corridor #3
I have been very pleasantly surprised by this series so far, and this issue seems to be promising that the two stories in the comic are going to be tied a little more closely together. Given that my biggest issue was that there didn't seem to be much consequence to the stories, especially The Seven Deadly Daughters, it's a good sign that they're looking to bring things together.

Really, all you'd need to say to sell me on this would be "Brian K. Vaughan". The rest of the premise sounds like an 80s movie, and I'm not sure if it's the kind of thing that would really appeal to me, but Brian K. Vaughan is writing it, and that is all I need to start reading it.

Plutona #2
When reviewing the first issue, I was saying that this really wasn't a superhero comic - it was all about other people in a world with them. Given that, at the end of the issue, the main characters found Plutona, who was the world's greatest hero, dead in the woods, that promises to take this in a different direction. I'm interested in where that means that this is going. I'm hopeful because of how good the first issue was, but also somewhat worried because that was what made it unique, and I don't want to see that lost by starting to create a rather straightforward superhero story.

Saints #1
To quote the Image Comics page: "Blaise, Lucy, and Sebastian discover a Holy War is erupting and they, unwittingly, are the next generation of Saints poised to fight for a heaven that God has abandoned." I love weird takes on religious ideas, and this sounds right up my alley.

Star Wars: Shattered Empire #2
The first issue of this series gave us both the comics' first foray into the future past Return of the Jedi, and a bit of origin for a main character in The Force Awakens. I want to see more of what happens between then and now, dealing with the fact that the end of Jedi was not the end of the conflict. While it's a bit more like housekeeping than I would like out of a story, it at least is telling a pretty good version of that story so far.

Star Wars Lando #5
I fell behind a bit on this series after the first issue, but it was a pretty good start to things, especially with a great cliffhanger at the end of the first issue. Now that it's coming to a close, I'm really interested in seeing what happened, and managing to make Lando feel like a part of things without overly inflating his importance for no real reason.
Posted by Zac at 12:00 PM