This was originally posted as a review for Word of the Nerd. Reposted here with slight modifications.
The Steam Man is a combination of western, steampunk, alien invasion, and vampire story. I love reading stories made up of different elements that feel like they were pulled out of a hat, but end up working together, so of course this was a perfect series for me to try and jump into. It gets started on the right foot, but it's not so outstanding that I'm ready to declare undying love for it quite yet.

It starts out on a bit of a rough note, since a lot of the book is filled with narration. The captain of the Steam Man, William Beadle, is a little too verbose in explaining everything that has already happened. He has a good sense of humor, and his voice carries a lot of the exposition forward with his humor, but it's still much more than is really necessary. 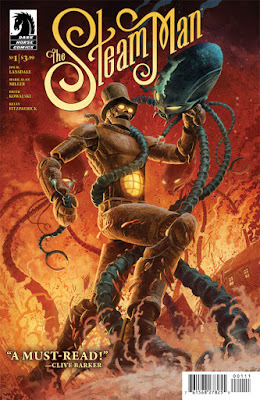 The rest of the crew is a mixed bag. There are four members of the crew, including the captain, but two of them get so little to do here that they don't serve as much more than set dressing here. The one that sticks out is Feather, the navigator. He comes to the group as an outsider, and seems to be serving as the voice of reason for everyone else in the crew. He shares in having a strong sense of humor, which the other members of the crew either lack or haven't been shown to have quite yet. Since he is a Native American character in a story in the late 19th century, there are some parts of his portrayal that might seem a little stereotypical, but he's filling a role that makes sense, especially given the time, and doesn't come across as actively offensive, but as with all things, this can be highly subjective.

The art is interesting in that it doesn't look so different from what I would expect, but that's not a bad thing. Take these elements and imagine what they would look like: the old west, a steampunk mech, and squid aliens. All of these things will look pretty much like you're probably picturing them to, but they all fit together and feel like a single coherent world. While they're not all the most original designs, taking so many disparate elements and making them fit together really works here. 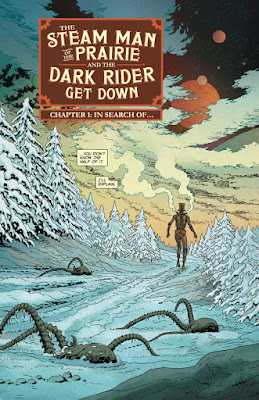 All of this ignores what really drew me in during the story: the Steam Man himself. He's a machine much more than a character, but it's important to look at what he does and why that helps the story so much. Why he works is that he is not just a backdrop for the characters and their story. While that could work, it feels much more real seeing the machine be, well, a complicated machine. There are a ton of different systems that need to work together, and the crew all have important jobs in trying to get him to work properly. They have to fight against it, with a lot of things in it just barely working, like nearly running out of water to fuel it and not being able to move quickly because it takes an hour to heat it up. These make it feel like a real part of the story and possibly an element to conflict, and that makes it feel like a real machine, not just the canvas they use for telling the story.

My question with a first issue is always if it makes me want to read the next one. There were elements of The Steam Man that I didn't like, mostly the reliance on narration, but there were enough of the other elements that I did like to make me interested in the next one. On that scale, it's a definite success.