First thing being first, I did not hate Season 3 of Arrow. I know that it got a lot of hatred for a lot of things that it did, and while I think that Season 2 was definitely superior, I still liked Season 3 quite a bit. Most of the problems were coming from the logic of the world, not the emotional and character work, and I find that to be a decent trade off to make.


Regardless of that, we're here at the beginning of Season 4, after what could've easily been the series finale of Oliver and Felicity riding off, leaving everything behind. We pick up with them in some incredibly painful suburbia scenes, but that's exactly what made them wonderful. They do not fit in the suburbs, or whatever life they thought they were living there, and that was driven home by those scenes. There's also the great idea that Felicity was the one who got bored of that life and was helping the team behind Oliver's back. He's given it up completely because he can't keep himself from going completely into the darkness, but Felicity has never had that problem, and doesn't feel like she needs to cut it out of her life completely, and doesn't even want to. Even then, the most important part of these scenes is that it puts them right back to the chemistry that they had before, the reason why people wanted them together in the first place - they just have such great chemistry that they feel like a pretty natural fit together. 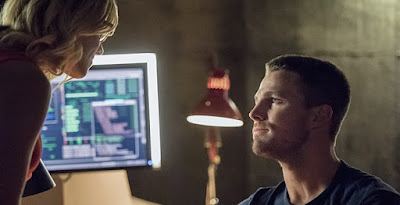 With Oliver and Felicity gone and Thea, Laurel, and Diggle trying to keep Star City together, I'm getting flashes of either Season 3 or 6 of Buffy, when the team was trying to keep Sunnydale under control in her absence. We see some of them working on their own, and they're obviously not doing enough, and just the bit of them working as a team that we see here is all that we really need - the story really starts to kick in once Oliver comes in, so we didn't need to spend longer with them in that situation. While I understand exactly why he's that way, it doesn't make it less frustrating to see Diggle not really working with Oliver, since it feels like the kind of manufactured drama that he would almost always go out of his way to cut through to keep the team going. Thea is threatening a storyline about anger problems or something else causing her to have problems, likely related to the Lazarus Pit bringing her back, so the team ends up with Laurel being the best adjusted and most straightforward member of the group right now. 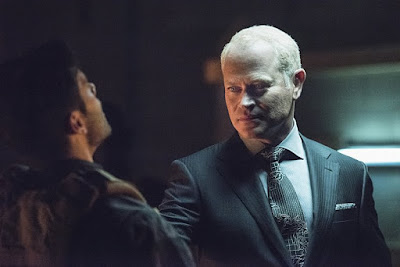 With Damien Dahrk, the show has completely thrown out any pretenses that it might have had towards being more grounded or anything of the sort. We were already 99% of the way there, with the Lazarus Pits from last season, but it's good to see them being embraced by the story now. Since they opened the door to the bizarre with The Flash, it makes sense to just go fully for Oliver being the normal person in a world that has gone completely weird, and they seem to be fully embracing it.
Then we have the flashbacks. Yes, there was a nice little reference to Hal Jordan in there, but it's really just a small reference and I doubt Warner will even let them use him because they have their bizarre way of managing their TV properties. I really like the idea that Oliver tried being the prototype vigilante in Coast City and basically failed at that. There is the complete lack of clarity at what he's going to be doing back on Lian Yu, and the fact that it means he has to leave there again at some point, then come back - there are still things that they have committed to him doing while he was gone that he can't do on the island, and I'm just hoping that they don't turn the story into a pretzel trying to get him to hit all of those points. 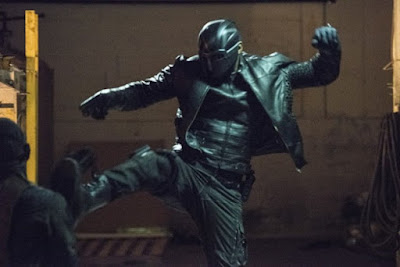 Of course, there are two things in the episode that people really want to hear about, the two big things near the end of the episode... and I don't really know what I think about them quite yet. First, we have Lance working with Dahrk, which was not at all something that I expected to be the case. It does make a couple strange things in the story earlier make sense, so it ties together the story in the episode nicely. As a bigger thing, going beyond this episode? I'm going to have to see where it goes in the future. It seems like there could be some coercion, or it could work out some other way, but we don't know quite how it's going to work. I don't think it's as problematic as the other issue I know you're probably asking about... 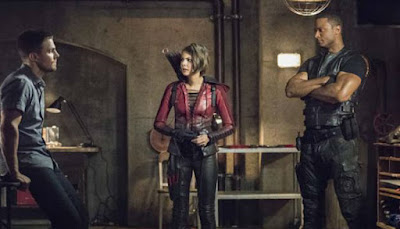 The flash forward. Well, they copied the flashbacks from Lost, but it took them an additional season to get to a flash forward, so there's that, at least. I can try to go into all sorts of speculation, but that's not for here. This is for a review, not speculation, and... from just the perspective of this episode, it feels really cheap. It all depends on how they end up using it later on, but as it is in this episode, it feels like something added in just to throw off the audience, not something that really works as an organic part of the story. It's especially bad because they don't show who died, which would at least give a solid hook for where they're going to take the rest of the season. It's someone close to Oliver, and Barry is coming for the funeral, though that doesn't necessarily mean that it's Felicity, but the lack of certainty just makes it seem like a cheap move to manufacture buzz, which seems to have worked for them. Again, this could change later on - this is the show that did an almost complete retcon on Sara at the beginning of Season 2 and turned that into the best character on the show, so it could very well work out, it's just hard to tell right now.
I probably sounded down on this, but only in the sense that a lot of my problems are somewhat sloppy storytelling that could be righted once we've seen more of the season to see where they're going with it. I'd probably put this one above the premiere of The Flash, which is not what I expected to get out of this episode. It's a good start, not like I was in danger of giving up on the show, and it feels like they have a lot of good things ahead of them.