This was originally posted as a review for Word of the Nerd. Reposted here with slight modifications.
Last month, I was quite pleasantly surprised by the first issue of Dark Corridor. Many other comics are about crime in dark and depressing worlds, but this one was different. The different style made it stick out from similar comics, something that continues in Dark Corridor #2.

The first story, "Red Circle", starts by flashing back to Carter when he first went to prison. As you might guess from his position in the present day, it goes from bad to worse quickly. To contrast, we see him in the present day living large off his wealth from the jewelry theft in the first issue. We don't quite see the repercussions, but it gives us a strong indication of just how much he cannot help himself and keeps throwing away any opportunity he gets in his life. 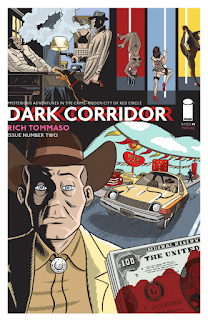 The second story, "Seven Deadly Daughters", shows what happened when Nicole killed the Scalinas. This story was weaker than the other one; we see the process of the murder, but not a lot of what it means for any of the characters. It's not badly done, there's just no real depth to what's happening in the story.

What really made this comic stick out is the art. "Gritty crime story" is the last thing I expect to see paired with a nearly cartoony style. Everyone has simple designs and big expressions, far from the normally more realistic style in other comics of this genre. It shouldn't work having terrible people doing bad things in art that would fit in a kids' comic, but this series somehow pulls it off, making it stand out from the rest of the genre.

Given all of that, I think this is definitely worth a look. It's not one of the great comics being published right now, but it is more than worth paying attention to.