Before reading this, I had no idea that Switch was related to the Witchblade series. It's not the most direct connection, but the Witchblade is in it and the creator worked on Witchblade before, so I'll count it. I've wondered where was a good jumping on point for that series, and this seems as good as any.


This book has problems that should bug me. There's narration, a mythology dump, and characters who only exist to be important later. The last one is a real problem with the story, but the others actually turn out to have positive sides. 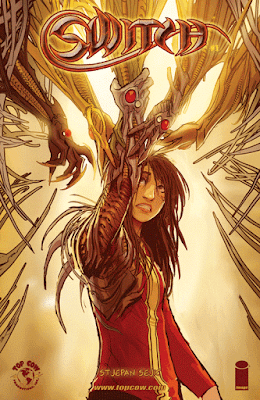 The narration not only works because we get in Mary's head, but because it frames the story interestingly. While it doesn't fall into the bad trappings of an origin story, it still is telling one. Many people have bad reactions to origin stories, but the narration allows it to sneak in. It's being told after the events of the story, so it almost seems like we're picking up right after the origin story. By the time it becomes obvious we're going through that part of the story, it's become compelling on its own, and any ill will towards an origin story is lost in the fact that it's just a compelling story.

The mythology dump should be too much. I would never recommend someone that much information in scenes like that, it doesn't suffer from being dry and overly detailed. Instead, it leaves gaps in the mythology, leading to interesting places where there aren't answers to everything. This makes the world feel much larger than we've already seen, always a good thing when working with a potentially huge world.

Enough qualifying statements about things that mostly work. What really works here is the art. While all of it is strong across the board, my favorite part is about the Witchblade itself. It's not the design, which I do like, but how it's shown. Using it is channeling the energy of an ancient warrior, giving me Buffy vibes, and it's drawn as Mary fighting parallel to that warrior. When she kicks at her enemy, the warrior's foot is drawn right alongside her. It not only looks cool, but also shows the way it works, channeling her skills through Mary's body.

With this book, I have found something new to follow each month. Not reviewing, but definitely reading every month. It has its flaws, but even those mostly work in its favor.
Posted by Zac at 12:00 PM