This was originally posted as a review for Word of the Nerd. Reposted here with slight modifications.
The first interesting thing I noticed about this comic is the title, Lara Croft and the Frozen Omen. Tomb Raider is not in the title, which is both apt because there are no tombs, and an admission that Lara is well enough known that her name should be able to carry the marketing. With the change in the games to focus more on storytelling and Lara as a character, which the title here is hinting at, it could be a good shift for the series as a whole. The real question is that this is a video game tie-in comic, which don't have a great history, and will they bring that storytelling care here as well?

This issue starts off the same way that a James Bond movie would, with an unrelated action sequence. It's not the biggest action, but has Lara doing some mountain climbing, trying to find a lost falcon for a friend of hers, which is not as ridiculous as it sounds. It serves the same purpose, being a good place to start to get into the story and set a tone, as well as showing off good views from the mountain and how large the scenes can be. It's simple sequence that is a good gateway into the rest of the book, but it unfortunately is also something that that rest of the book can't match up to. 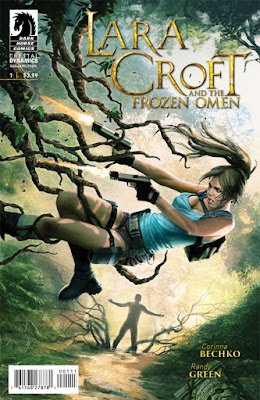 When we pick up with the main story, we're following Lara as she works for the British Museum. A relic goes missing under very suspicious circumstances, seeming to just disappear on the surveillance footage, at which point they start to investigate what might have happened. It starts to feel like they're trying to make an Indiana Jones story, which Lara Croft is obviously based on, but it starts to stumble from her early scenes, providing clunky exposition that explains what happened effectively, but reads terribly and makes the characters sound unnatural.

It turns out that the exposition was just a surface problem, as the rest of the story doesn't do much. It's such a rote mystery/thriller story that I had trouble getting engaged in it. The problem isn't that I already know what happened or who is responsible, especially since the end of the story is on such an odd cliffhanger that I have no idea what is going on anymore. The problem is that it's hard for me to care about what is going on. Despite being based on Indiana Jones, Lara is not as much fun as that character. Her interactions with others don't pop, the action sequences don't quite work past the first one, and the story is uninteresting, causing all of the things that should be there to fall to the side and not be that interesting. There are even strong indications of supernatural elements, including actual demons, that just are not intriguing and fall completely flat.

The art also falls into some of the same problems. Like the story, it's actually quite good in the opening sequence, with huge establishing shots and great vistas, but once it gets beyond those few pages, it stops being so interesting. Part of that is due to being in more mundane settings, but even the later scenes set in the jungle look less interesting than it was in the beginning of the issue. The art is never really bad, it is just good enough to not be in the way of the story, but not good enough to really draw me in.

I didn't really expect much out of this series, but I had hope for what it could have been. The Tomb Raider series has been much more interested in storytelling recently, and I was hoping that would carry over here as well. Instead, it's mostly a generic video game tie-in comic, lacking anything to really recommend about it.