This was originally posted as a review for Word of the Nerd. Reposted here with slight modifications.
I have almost no experience with the Mirror's Edge game, save playing through the demo a few times. It still made enough of an impact that, when I saw this comic was out there, I was interested in seeing what it had to offer. If you don't have experience with the game, don't worry; everything you need to know to jump in is summed up on the first page.

Unfortunately, the weakest part of this comic is also the part that I usually give the most attention to: the story. I love anything with a strong story, but this comic doesn't have one. Every development is either telegraphed in advance or an obvious place for the story to go. Even that wouldn't be a bad thing if they were particularly well done. Instead, it's mediocre execution all around. The closest to a defense I can come up with is that it's in the first issue and setting up, but that's not a defense I would stand behind. There needs to be something in the first issue to get behind, but that's not in the story of this issue. 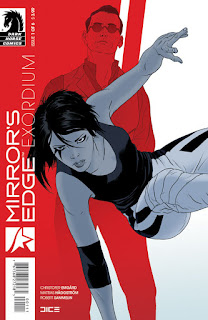 The thing that might make it worth coming back to is the art, a defining characteristic of the game. Mirror's Edge was different from many games at the time because it was bright and colorful when most games were overwhelmed by brown and desaturation. The comic copies that look, showing the more optimistic view of what the future might look like visually. There are a lot of bright, saturated colors here. It's not quite as bright as the game was, but it would probably be too bright and oversaturated if copied exactly.

The other thing that jumped out at me about the game was the sense of motion. It was all from a first person perspective, which caused a lot of issues with motion sickness, but when it worked right, it was an amazing feeling of motion. For the most part, that's here in the comic, just not in the first person perspective. When Faith is racing other couriers across rooftops and jumping off buildings, it brings a lot of that sense of motion with it. It's not perfect, but the result is still a very dynamic feeling that I was hoping for but not expecting.

I'm not sure that this is a comic that I would recommend, but there are some good things going for it. Despite a mostly forgettable story, the art does a lot to help redeem it.