This was originally posted as a review for Word of the Nerd. Reposted here with slight modifications.
Last year, there was a miniseries called Wild's End, about a village that was caught in the middle of an alien invasion. Don't worry if you haven't read it, since I didn't read it either, and it's not really required reading for the new series, Wild's End: Enemy Within. Enemy Within manages to stand on its own, and works well as a story set in the aftermath of an alien invasion.

The first thing you'll likely notice and ask about is that yes, all the character are animals. If nothing else, it makes a good change from comics tending to show human faces all the time, and having variety in that presentation is not a bad thing. Usagi Yojimbo has done the same thing for years, and everyone has gone from asking "Why animals?" to "Why not?". Other than a few character traits matching the animal, with an old and wise and kind of stuck up owl, or a rather clever fox, they're animals because it looks good and there's no reason for them not to be. 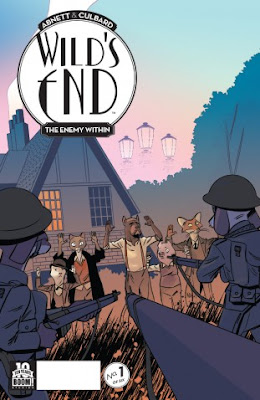 For being about the aftermath of an alien invasion, the book takes a little while to get to that point. The first major scene follows two science fiction writers meeting on a train, both of them headed to a conference, and both of them realizing that they cannot stand one another. It's an odd start, but they serve as our viewpoint characters for this story. Their conflict doesn't really pay off in this issue, but they allow us to follow characters that need to have what happened explained to them, allowing the necessary exposition about the previous miniseries to come across in a way that doesn't feel forced.

The subtitle, Enemy Within, comes from how everything is being handled after the invasion. The village is now occupied by the military, trying to keep anything inside from getting out, with the exception of their consultants, the science fiction writers. All the people in the village are being treated as suspects, since the aliens could take different forms and no one knows if they could be the people of the village. We don't get a lot of deep characterization to them, but this is written so that's not entirely necessary right now. We have our viewpoint characters developed, and in a good use of writing a sequel, if you're curious enough to need to know them better, there's already another series focused on them.

I normally have problems with stories that spend too much time on setup, but this is an example of a story that manages to pull it off well. The key is that things are always happening, from the little things to bigger, more important things. Being bogged down in setup is only really a problem when there's nothing else to hang on to, but the introduction of the concept, the new characters, and slowly revealing information about the new characters makes all of that setup work. Instead of waiting for something to happen, things are happening in service of the larger story, a difficult balance to hit right.