I started following this series after picking up the #1 issue randomly. I read just about every #1 from Image, but don't always pick up the issues after it. This comic just hits a very specific spot for what I want to see and feels like a recent theme: comics that decide they're going to throw as many ideas out there as possible and make them work. Somehow, Mythic has kept pulling it off for a number of issues and is showing no sign of stopping. 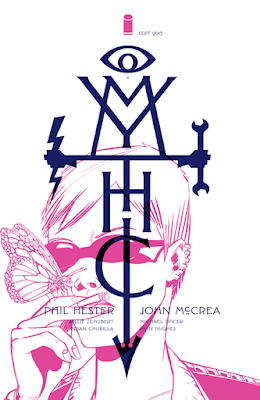 It's taken a little while, but the plot of the series is really starting to develop. It wasn't a focal point before, with most of the development being in the background. Our protagonists as on their own as other teams are disappearing, with no one around to help them. There's not a lot of plot development, but it's starting to take a major role in the story, including diving deeper into the backstory, specifically about how Dr. Baranski died and why it hasn't slowed her down yet.

The reason the plot hasn't mattered so far in the series is that this comic has figured out how to weaponize comic book insanity. While it doesn't quite match up with last month's giant, profane baby wrestling a dinosaur, the skyscraper-sized worm threatening to eat dwarves deserves some recognition. The entire series has been about things that are, well, mythic in scale, with the creatures and situations. This comic goes as far as to bring in Heaven and Hell and all gods across all the pantheons, and the characters just deal with it, unfazed. We even have a character here who looks right at a god and tells him that he's not real, and it wouldn't even matter if he was.

Of course, just having the creatures and gods means nothing if they don't look right, and this series more than delivers on that. For the giant worm at the beginning, the sense of scale is enormous, which is exactly what we want given their size. The gods look like they should be gods, though they're rejected by the main characters. The world is not realistic, but just stylized enough for all these creatures and gods to feel like a fitting part of it, but not to throw us into a completely unreal world. It's not trying to be real, just real enough.

The plot is picking up, and could very well become an element of the story that feels important between bouts of insanity that the writers inflict on us. For now, this works great as the pure joy of seeing what is the next thing that the creators will come up with and throw at us, and sometimes that's all you need.
Posted by Zac at 12:00 PM