Awake is only the second comic I've read from Action Lab (the other being the surprisingly good Princeless: Raven the Pirate Princess), but I'm getting a feel for one thing they do well: All-Ages comics. They're not perfect, but they're so much fun I'm more than willing to overlook the flaws. 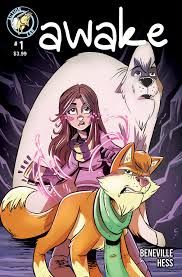 Awake starts off without a concern for exposition. You don't need to know everything when it starts, but takes off at full speed and trusts that you will be able to keep up. Other comics would stop to explain that Regn can do something to help the dead planet, but this starts with her already on an adventure. The story slowly builds through dialogue, which I wish more people would embrace instead of feeling the need to drop exposition.

Jumping right into the story works well because the art helps to propel the story forward. This is obviously an all-ages story, so bright and colorful, but that just makes the world feel more alive. It also shows that it is definitively not our world. Regn's friends aren't just animals, but animals that don't exist in the real world. Then when the magic becomes explicit, it feels perfectly at home in this world. The art builds this atmosphere easily, propelling you quickly through the story.

That propulsion pushes through some flaws that would kill other stories. The hardest to forgive is the ending, where the story just comes to a stop earlier than it should. I don't have a good reason to forgive it for that, but the rest of the issue is so much fun I just try to ignore it. The other flaw is where the story breaks away from Regn to focus on other characters for a couple pages. They have no plot or character relevance, and don't appear again after that scene. It helps add to the size and scope to the world, but still felt like a slightly awkward distraction.

A first issue is a success if it gets you to want to read the next one, and this does that easily. It needs to pay off its promise in future issues, but for now it's exactly what it needs to be.
Posted by Zac at 12:00 PM