This was originally posted as a review for Word of the Nerd. Reposted here with slight modifications.
Shrinking Man #1 is the first issue in IDW's adaptation of the Richard Matheson novel, which even if you haven't read it, you likely know from reputation. True to its name, it follows a man who is shrinking a little bit every single day, and despite their best efforts, scientists have no idea why it's happening or what they can do about it. 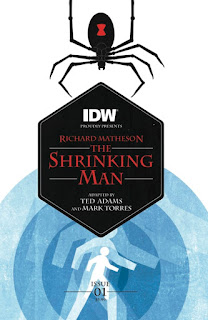 The story in this issue is split between the present, when he is down to 5/7ths of an inch in height, and various points in the past as the shrinking started to take its toll. In the present, it's all about survival, trying to get food and just generally survive in the moment against rats and spiders that are giant compared to him, while in the past we deal with problems like how it affects the other people in his life, and how to pay for all of the tests that have to be done in the process.

For as good as the concept and its source is, this story is not suited to being told as single issues. This first issue just ends, not in a satisfying place for the story, but just ends because it needs to in order to fit in a normal comic issue. Instead of making changes to the story in the novel to make it fit the smaller units of the comic, they just take a long form story and cut it into pieces.

This is the first of a four-part miniseries, and there will definitely be a trade paperback when all is said and done. It feels like this will read best in that form, since the breaks are mostly gone and the story can form one larger piece, rather than making it into single issues so they can sell those too. If this interests you, wait for the trade, there's really nothing to get out of the single issues.