This was originally posted as a review for Word of the Nerd. Reposted here with slight modifications.
Transformers: Combiner Hunters One-Shot starts off with an idea that I can really get behind. There is the possibility of combining some Transformers together to create a much larger one, and while that is happening, there are other Transformers hunting them down. As a high concept premise goes, it's pretty good. Also, despite this being a one-shot, it's not surprising that this is part of the Transformers comic universe; IDW has built a strong universe with those comics, and one of the strengths of a shared universe is the opportunities to tell a small story within that universe. 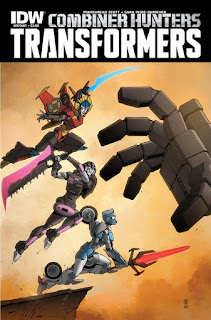 For the first half, I was enjoying this issue quite a bit. Even though my history with Transformers is limited, the important characters were being introduced efficiently, so it was easy to keep track of who everyone was. Anyone who didn't require a lot of explanation wasn't given any, so I could just tell who it was by looking at them. This lasted about the first half of the book, at which point it became obvious that the purpose of this book was an additional story for people already very steeped in this universe. Characters were being thrown in, introduced by just their name and assuming that you already knew them, and I was starting to lose track completely of who was doing what or even what was happening in the first place. It quickly went from something that would stand on its own to just a side story in the main series that you need to be familiar with to understand what's happening. If you know the Transformers, your opinion of this might be different, I'm sure that it'll read differently, and you will probably like it. If not, there is an interesting first half, but the whole thing is just not worth it.
If you'd like to see more, find this article and others like it at Word of the Nerd, and many thanks to them for allowing cross-posting.
Posted by Zac at 12:00 PM