This was originally posted as a review for Word of the Nerd. Reposted here with slight modifications.
Dark Horse has a long and proud history with horror comics, and Death Head #1 is just their latest entry in that genre. I've never been the biggest horror fan, but I'm always willing to try anything. Unfortunately, this first issue ends up being more than a bit of a let down. 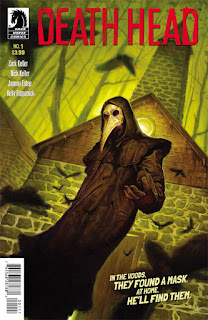 It tries to focus on three stories in parallel, except that each barely gets things put into motion. In the first, we have a couple on a hiking trip through the woods when they run into an abandoned town. Exploring the town, they find themselves in a church when things start to go very wrong. In the second, we have a girl (that couple's daughter) in a Catholic school because no other school will take her, and we mostly just see her tension with the teachers at the school. In the third, we see a boy (the couple's son) getting picked on by bullies and thrown into a sewer, supposedly where a monster lives, and he finds a girl in there hiding from the monster.

All of these stories are just setting things into place for whatever is coming in the next issue. We do end the issue with a glance of the Plague Doctor, the monster that seems to be after the parents, but he is not threatening during the story. There's not really a sense that he's causing things to happen until he's seen at the very end, so while it follows the idea that the monster you don't see is scarier, it's also not scary if you don't get the feeling first of why it should be scary. At the same time, I do really like his design, especially the mask. It looks vaguely bird like, making it just barely not a featureless white mask. The black robes are not original at all, but its combination with the mask looks especially good when put next to each other.

Overall, there was just not much in this issue. There was too much spent on trying to set things up for later, and it will probably read better as a trade than as single issues. Honestly, I don't think I'll likely read the next one. Horror is something that Dark Horse can do really well, but this one was just not that interesting.