This is a particularly weird issue of Buffy. It has gotten a lot of positive reception, which I understand and don't completely disagree with, but it is also a weirdly flawed story that doesn't work for nearly the entire issue. Somehow, the ending pulls it together, even though the rest of the issue doesn't really work.


The first major part of the story has been pretty much inevitable; since Giles was brought back in a younger body, it was pretty much inevitable that he would be aged up at some point, either temporarily or permanently, and they opted for temporarily. While it's interesting to explore, it runs into a problem that is shared a bit with the other major storyline: while very important to the characters, what's happening is not as important to the reader. 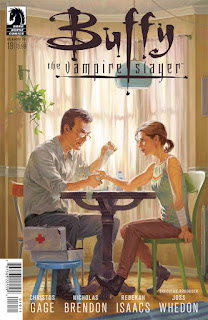 With Giles and his short time as an adult, the problem is that we never really knew his personal life. This issue keeps showing how Giles's life has changed, how things are so much less interesting than they used to be for him and he really has nothing left, but we never saw what it was like in the first place. He spends some of the day with Olivia, a character we saw briefly back in Season 4, but other than that we never really knew his personal life. It can't have as much of an effect if we don't really know what it changed from.

Then we have Hank Summers back in the story. He hasn't appeared in actual reality since Season 2, Episode 1 (there was an appearance in Season 6, but not actual reality). This also means that he's never actually met Dawn despite living with Buffy and Dawn until shortly before the beginning of the series, but that's just some of the weirdness of how Dawn plays a part in the story. While it really hits Buffy and Dawn hard seeing their dad for the first time in forever, I didn't quite feel the impact as strongly because of his prolonged absence, and lack of consistency in how he was characterized in a lot of that time. Buffy also has a strange reaction to him being there, which I won't say is out of character, but felt a little bit forced for the effect they were trying to get.

For all these issues, it all comes together in the last few pages, and almost makes the whole thing work. It was always obvious, and later made explicit, the Giles basically took on the role of father in Buffy's life. That has been in the background this season, as he's looked like he's 12 for a while, but this was the opportunity to go back and explore that part of the relationship. The issue ends with a rooftop conversation (it really wouldn't be Rebekah Isaac's art without a rooftop scene) between the two of them, really reaching a very heartfelt point, and it ends on that high note, showing that relationship is still really there after all this time.

This isn't a bad issue, it's just shaky with a great ending. It's perfect for obsessive fans of the series, which is all the audience that is left, but the rest of it feels just slightly off. I don't blame people for liking it a lot, it's easy to forgive some shakiness for such a strong ending.
Posted by Zac at 12:00 PM