This was originally posted as a review for Word of the Nerd. Reposted here with slight modifications.
Writing about Morning Glories at this point is a nearly impossible task. This series has been going for almost 5 years at this point, and is unfriendly to new readers to the point of being outright hostile. The storylines are labyrinthine even when they're playing nice, the mythology is still unclear, and it makes Lost look positively straightforward. Still, for all of that, this series is truly great when doing what it does best, and for those who have put their time in, even a slower issue, like Morning Glories #47, is still a good read. 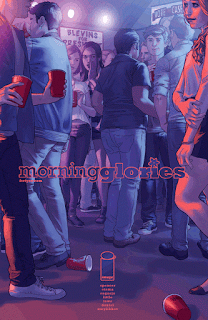 The entirety of this issue is spent in a party that Casey, a character we have followed from the beginning, is throwing in order to help her campaign for student body president at Morning Glories Academy. That's all it really is, showing her interacting with the students she's trying to get the vote out of, and all the other interactions that are happening with other characters, both at the party and at the things outside of it, with characters that are not attending. There's not a lot going on plotwise, but in a way, that is the perfect way to show how this series works: it is never about the plotlines or backstory. This series has often been compared to Lost, and one place that is definitely true is with regards to the importance of the characters. We really just want to spend time with them. The story will go to the truly insane, but we want to follow these characters through anything.

On that note with the characters, I need to congratulate Joe Eisma for doing what I consider nearly impossible. There is an absolutely huge cast for this series, and he manages to keep all of them distinct. Outside of some of the more insane plots where it's an intended effect (time travel and clones, mostly), it's clear who everyone is as soon as you see them; even if the characters have similar physical traits, they all look distinct and recognizable right away. Considering the dozens of characters involved here, I have to give him more credit than I know how to properly give.

This is the latest issue in a series that is hostile to newcomers, so while I liked this issue, I do not recommend anyone try to jump in here. If what I talked about here strikes you as interesting in any way, I recommend getting the first trade. If you like the characters and are willing to go along with a plot that can and will go absolutely anywhere, you'll be in for a bizarre treat with this series.