This was originally posted as a review for Word of the Nerd. Reposted here with slight modifications.
Sometimes, a story can sell me with the premise alone. Whether it can be summed up in a couple sentences, or just in the title, if it's a short premise that can get me excited, it will take me a long way. For that, Aliens vs. Zombies #1 hits it right on, with the premise fitting nicely in the title, and the longer premise hooks me further, past even a somewhat lackluster beginning.

This issue throws a lot at the reader very quickly. In just a few pages, it tells the story of the zombie virus reaching Earth and how quickly it spread. This is all told as a somewhat detached narrator, not giving us any connection to actual character. One character is probably the narrator, but only because the narration turns to first person in the four panels he's shown on the screen. Other than that, we have no real connection to the humans besides plot devices to move things forward. The alien characters are given a similarly short shrift. There is one page where we see the lineup, looking like a page in a Marvel comic when a bunch of guest star characters come in to save the day, but that's not enough for us to connect to them either. We mostly get their names and little else, just enough to move us forward in the story, not to make us care about them as characters. 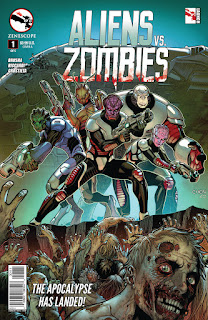 The art, while definitely not bad, is also not very outstanding. The aliens are mostly all humanoid, looking like they could be played by actors in suits, which is neither a good nor bad thing, it's just not overly memorable. It's hard to describe because, for the most part, if you can picture something that I've mentioned so far, that's basically what it looks like the way it's drawn.

For all these problems, I still did not dislike this issue. The series has a killer premise, and not just the title itself. Specifically, the zombie virus has hit Earth, and it's still in the middle of the epidemic. Yes, that leads to a lot of the tropes of a zombie story, but then the aliens come in. They have been tracking this virus across space, and they know how to deal with and neutralize it. They're not successful at neutralizing it at the first try, and now have to get on the ground and fight to get what they need back. We now have a three way war on Earth: Aliens vs. Zombies vs. Humans, and the Aliens are on the humans' side, but will they trust them?

This particular issue was not all that great, and it could have likely been summed up by the inside cover paragraph and have the series start there. Still, while this was disappointing, I love the premise so much that I want to see what comes up in the next issue, once the story really gets going.